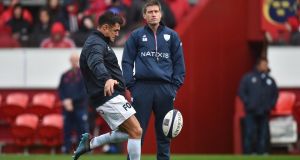 Ronan O’Gara is held in high esteem by former Crusaders great Dan Carter with whom he built up a close friendship at Racing 92. Photograph: Diarmuid Greene/Sportsfile via Getty Images

When reports of Ronan O’Gara and his family relocating from Paris to Christchurch first broke, on some levels it seemed a little unlikely. But when it came to pass yesterday, it made sense on even more.

Under contract until July 2019 at Racing 92, the Parisians seemed like a good fit for another season or two. After all, they are about to move into their new home at the indoor, state-of-the-art U Arena and have made another bunch of new signings, including Simon Zebo, who presumably would have been looking forward to working with his former Munster and Irish team-mate.

Against that though, with the joint head coaches Laurent Labit and Laurent Travers having signed new contracts keeping them at Racing until the end of the 2021-22 season. O’Gara’s responsibilities at the Paris-based club have broadened beyond his initial remit as kicking and defence coach, and he now also does much of the video analysis on the opposition.

But there would have been no prospect of a promotion at Racing 92 for the next four seasons, whereas relocating to the Crusaders as Scott Robertson’s assistant will see both his remit and his experiences being extended.

O’Gara will take over from Leon MacDonald as the Crusaders’ backs coach and will love the Munster-like spirit within the squad’s set-up and the loyal if often chided “one-eyed” Crusaders’ fans. MacDonald resigned one year into his two-year deal with the Crusaders to return home with his wife and four children and take over Tasman.

O’Gara is in his fifth season with Racing, but in yesterday’s statement by the club they stated they “did not want to deprive one of its faithful servants of a great opportunity”.

Robertson, the well-travelled former All Blacks flanker who had stints in Ards, Perpignan and Japan, is a hugely regarded coach, having guided Canterbury to back-to-back ITM Cup titles in 2014 and 2015.

Robertson took over from Todd Blackadder at the start of this year and after 11 seasons without a title, the Crusaders won their eighth Super Rugby title this year, confirming their status as the most successful franchise in the competition’s history, and they have been at the hub of all that is progressive in New Zealand rugby.

That the reigning Super Rugby champions are prepared to bring O’Gara on to their coaching ticket is testimony to the esteem in which he is held globally, and especially by Dan Carter. The great man won three Super Rugby titles with the Crusaders, scoring 1,708 points in the process, the most by any individual player in Super Rugby history, and the two outhalves have built up a close friendship in their three seasons working together with Racing 92.

Articulate, thoughtful, intelligent and independent minded without being belligerent about it, O’Gara’s punditry on RTÉ will be sorely missed, but all these attributes plus his immense knowledge and playing experience will be further enhanced by his time with the New Zealand franchise and working in the southern hemisphere.

It is a bold move, and quite an upheaval to move his young family from the outskirts of Paris to Christchurch, which clearly demonstrates also how supportive Jessica is of O’Gara’s coaching career.

Great players don’t always make for great coaches, but O’Gara is clearly intent on doing everything in his power to ensure that doesn’t apply to him.

He assuredly would like to coach Munster and indeed Ireland one day, and has all the attributes to do so, and to be an exceptional one at that. This decision and move demonstrates as much. He always had a phenomenal skillset as a player.

Even as an outhalf, how else could a player of 6ft in height and weighing just over 13 stone have endured 16 seasons at the very top of the game, becoming Ireland’s second-most capped player, and the leading all-time points scorer for both his country and Munster.

Whereas he remained with Munster for the duration of his career, he is intent on trawling the world as a coach. A huge admirer of Joe Schmidt, with whom he worked for a week in the USA leg of Ireland’s summer tour last June, O’Gara has exacting standards for himself and to that end wants to make himself as good a coach as he can possibly be.

The Irish scrum coach Greg Feek, who got to know O’Gara during that week, said on Tuesday: “Sometimes these things come about because you are in the right place at the right time, and maybe being able to bluff your way in a little bit as well.”

Pointing to the “cross-pollination of ideas” between the hemispheres, and notably after a Lions tour, Feek added: “That’s where things like Rog start happening. For Rog, he will be just a super-sponge.”

In extending his time as an assistant, and enhancing his experiences by working with the most successful franchise in Super Rugby history, O’Gara is also now broadening his skillset as a coach. By the time he does eventually pitch up back in Ireland, he will have accumulated the broadest CV around the world of any Irish coach in the professional era.

The length of O’Gara’s contract has not yet been confirmed, and it may be that he will broaden his horizons further, but it could also be that he will succeed Johann van Graan, who has signed a two-and-a-half year deal with the province, in three years’ time. By that stage, O’Gara will have been eight years working as an assistant coach in the Top 14 and in Super Rugby.

In all of this O’Gara understands that this coaching game is a marathon, not a sprint.