Christian Lealiifano will captain the side from inside centre 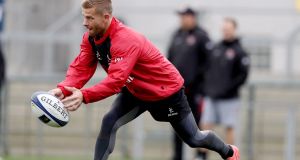 Paul Marshall is hoping to make his 200th appearance for Ulster on Friday. Photo: Tommy Dickson/Inpho

As Les Kiss had made abundantly clear earlier in the week, Ulster have gone for some notable alterations from the side which just about got past the Southern Kings three weeks ago (Kick off: 7.05pm, live on BBC2 from 6.55pm).

Eight players have been retained in the starting team – only three of them forwards – from Port Elizabeth with two of them, new skipper Christian Leali’ifano and Louis Ludik, shifting position to form an entirely new midfield.

Injuries have taken out Chris Henry, Wiehahn Herbst, Robbie Diack and Luke Marshall at a vital time for Kiss while neither Stuart McCloskey nor Sean Reidy have been made available from Ireland camp.

However, secondrow Kieran Treadwell is in the starting side after being released by Ireland while fellow national squad member Rob Herring has also returned and is benched.

Kiss has made some interesting calls though with Leali’ifano at inside centre, allowing Peter Nelson in at outhalf to make the starting side for the only the second time this season.

Ulster’s backrow is entirely new and is made up of Clive Ross, Nick Timoney and 19-year-old Ulster Academy flanker Aaron Hall who will be making his debut.

The bench is a stark mixture of the experienced and untried with Paul Marshall in line to win his 200th cap while Darren Cave and Andrew Trimble are also replacements.

Ulster will need to be on the money – they struggled to beat the Italians in Treviso back in September – as Benetton, even though they are missing a raft of internationals, have Alessandro Zanni, Roberto Barbieri, Tommaso Allen and Tommaso Benvenuti in their ranks.