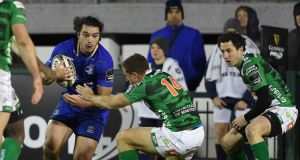 It is little wonder Leinster coach Leo Cullen was delighted ahead of bigger challenges this week after this emphatic win in Treviso where a brace of tries for new signing James Lowe and the return of internationals Garry Ringrose and Josh van de Flier gilded the victory.

A confident and disciplined Leinster may not have been spectacular, but the province had little trouble seeing off Treviso with a five-try haul in what can sometimes be a difficult place to get a result.

“A little bit of a slog,” said Cullen. “Plenty of errors from both sides, but very happy to get the win. Treviso came close against Ulster, so yeah. They have been in reasonably good form and Stadio de Monigo is a tricky place to come.”

The win, notable for a try-scoring start from former Chief’s winger James Lowe on his debut for the Irish province, and three more from the returning Ringrose following a shoulder injury, Jordi Murphy, and captain Luke McGrath, ensured Leinster are still right on Scarlets’ tail in Conference B.

While it may be a little soon for Ringrose or Van de Flier to face the premiership champions on Sunday, Cullen says they are timely returnees.

“Both played 70 minutes each. Gary has been out the longest. He hasn’t played since the summer tour so he’s had to do a lot of work to get to this point. It’s great to see him, he looked at home and scored a try as well. Josh, with the ankle [injury], had been going really well for us up until that point he got injured, so it’s great to have him back. And again, it adds to the depth as we enter into a huge block of games.

“If you think of the two Exeter games and the three interprovincials in 11 days and the final two pool games in Europe, it’s a huge block of games and it’s good to look at a few different combinations and makes it a competitive environment this week.”

Lowe fulfilled the excitement that surrounded his debut with two tries, the first in the 17th minute. The pack had made the hard yards after Leinster capitalised on a poor Treviso clearance and McGrath supplied the lurking Lowe from a maul as it stuttered near the finish line. Ross Byrne added the extras and a 24th-minute penalty to maintain the momentum after Treviso had opened with an early three-pointer. Leinster were in control up front and revelled in possession while Jordi Murphy added a second try, breaking through the porous cover for a 17-3 half-time lead.

Treviso were rewarded for a period of dominance after the restart when centre Juan Ignacio Brex crossed following a penalty to touch. Tommaso Allan added the conversion to reduce the deficit to 10-17 and give the home side some hope. But thereafter Leinster pulled away with three tries in eight minutes. Ringrose made his presence felt when scoring on the right wing, four minutes later Lowe supplied McGrath and in the 68th minute Noel Reid supplied the former Maori All Black, who stepped around the defence and exploited a huge gap for his second. Ross Byrne, who missed only one kick, added the conversion for an 11-point tally on the night.

“Lowe is a player we admired from afar. He has credentials as a proven finisher, so it is nice for him to get off the mark, get through 80 minutes, and get two tries. We’ve tried to manage James sensibly since he’s arrived, having come off a big season as well, but it’s good to get him up and running.”

With the break in the PRO 14 for Europe, Cullen says it is now all about trying to put a good plan in place for the next two weeks.

“It is going to be a really tough challenge. Exeter is team you have to admire, having built slowly and surely each year. Every season they get better and I remember when we met them in Europe and was still playing and we had an unbelievable battle there. It was their first ever European game and they missed a penalty at the very end of the game to draw it. So yeah, ever since they have got better and better and have shifted their focus this year on targeting Europe, while sitting pretty on top of the premiership.”