High-flying Cuala not resting on their laurels 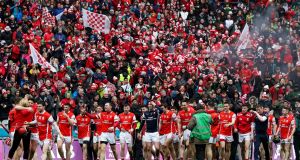 It’s safe to say that the timing probably didn’t appeal greatly to Mattie Kenny. The former Galway mentor, who last March managed Cuala to Dublin’s first All-Ireland club hurling championship, is up on a platform being asked questions by none other than Seán O’Rourke.

RTÉ radio’s flagship current affairs inquisitor, whose six children all passed through the club, has agreed to be master of ceremonies at Wednesday night’s unveiling of the club’s strategic plan, 2018-22, in Hyde Park, Dalkey.

The big barn of a hall familiar to parents from all of the indoor practice and larking that’s part and parcel of a GAA club nursery, has been transformed by display contractors and volunteers into a plausible approximation of a convention centre – platform, back lighting and velour chairs lined out in expectant rows.

Kenny is helping out by representing coaches together with Linda Farren, head of the women’s section whose own team won the club’s first provincial women’s title – the Leinster junior – in October. But it’s safe to speculate Kenny is more preoccupied with his four-day plans to deal with Offaly’s Kilcormac-Killoughey in Sunday’s provincial final rather than the longer-term business at hand.

They are part of what has been an annus mirabilis for the club, headlined in November 1969’s Gaelic News as ‘Hurling Outpost in South Dublin’. Aside from the above trophies, there was the hurlers’ three-in-a-row county championships, the women’s minor football championship and the club’s first two All Stars for footballers Michael Fitzsimons and Con O’Callaghan, who was also named Young Footballer of the Year.

Recognised by a clutch of Club of the Year awards, including Best Sports Club in Ireland by this newspaper, Cuala’s list of recent achievements prompted O’Rourke to wonder, “why the need for a strategic review?”

It was reminiscent of former GAA president Peter Quinn’s caution that the seeds of destruction for any organisation or empire have already been sown when it appears to be at its mightiest.

To help the steering group with the huge effort that produced the report, some outside expertise was enlisted. Lisa Clancy was formerly the GAA’s director of communications and she took the audience through the PowerPoint presentation.

The most striking thing is the membership growth. In 2002 Cuala had 520 members. This year that is up to 2,382 and projected to top 3,000 by the end of the four-year plan in 2022. The GAA accept that it would be better for Dublin were more clubs to be established given the huge memberships, particularly on the south of the city in clubs like Cuala, Kilmacud and Ballyboden but clubs are expensive to set up and don’t solve the problem of facilities.

With 12,700 new residential units due to be built in the next five years it is projected that nearly 20,000 young children will be living in an area already chronically short of recreational amenities.

Cuala’s surroundings belie statistics of prosperity. The premises in which the meeting is taking place may be impressively arrayed but it is an exercise hall with a small bar behind it and a meeting room upstairs. There is one pitch outside.

Clancy mentions the great strength of numbers and alludes to another club in a remote part of the country that has “a sound system that wouldn’t be out of place in the Abbey but they are really struggling for members”.

Like many a club in Dublin, Cuala has the numbers but no major nerve centre besides Hyde Park. Because of property prices, there aren’t that many of the membership actually living in Dalkey and the rest are scattered around. It has access to a further two pitches in Shanganagh Park in Shankill, shares another in Meadowvale and has two juvenile fields on Thomastown Road.

Training is spread across the borough, taking in synthetic pitches in the IADT, sometimes the local authority facility in Stepaside and often Bray Emmets across the border in Wicklow.

The problem is that any notions of acquisition come up against some of the highest property prices in the State. Plans to buy five acres from Blackrock Rugby Club created a fuss couple of years ago but came to nothing.

“We spent €70,000 last year on winter training,” says club chair Adrian Dunne. “We discussed it last year at a sports forum with the council and there’s enough suitable land left in the Dun Laoghaire-Rathdown Council area, which is land-locked between the mountains and the sea, for eight more pitches in the next 100 years. That’s to cover all sports and there are 50 clubs between rugby, soccer and Gaelic games.

“It’s probably the highest playing population of all local authority areas in Dublin with the least amount of land.”

He sees possible solutions in exploring partnerships with schools in the area, such as the Sancta Maria pitches shared with Ballyboden St Enda’s in south west Dublin.

The history of the club meanders back through time in the area. Next year will be the centenary of Cuala Hurling Club, founded in Dalkey, and taken as the formal beginnings of the club. Across the decades the fortunes of the GAA in south county Dublin have ebbed and flowed with clubs in Sallynoggin, Dun Laoghaire along with a roll call of different entities in Dalkey: St Begnet’s Dalkey Mitchels, Roger Casements.

The modern club emerged in 1974, as a football and hurling club with camogie coming on board shortly afterwards and eventually women’s football.

All four were represented on Wednesday – as were the Cuala Ultras, the group of teenagers that dress up in red and white and chant their way through matches and whose fire-engine dash between the women’s and men’s matches was a feature of the championship.

Hurler Mark Schutte, currently injured – his presence at such an event possibly an indicator that he wouldn’t be getting better by Sunday – was gently questioned by Seán O’Rourke on his prospects of playing and then on whether he would switch back to the county hurlers having joined the exodus from their ranks last year and signing up with Jim Gavin’s football panel.

Schutte was perfectly non-committal on all fronts leaving O’Rourke resignedly observing that the player would “hardly be telling me before Pat Gilroy” [the new Dublin hurling manager]”. He did mention his childhood Christmases, visiting his uncle Mick Holden and asking to see his All-Ireland medal.

Michael Fitzsimons now has five All-Ireland football medals, a Man of the Match from the 2016 final and this year an All Star. He said the medal won in September was the most enjoyable because his club-mates, Schutte and Con O’Callaghan had been part of it.

Dual player Sinéad Murphy acknowledged that her father Donal was one of the Crumlin Murphy’s – a well-known hurling family. She drew approving chuckles when saying that, now rooted in the borough, her dad “decided that Cuala was a better option than [Kilmacud] Crokes”.

Of equal significance was footballer Jess Tobin’s reply to O’Rourke that her family had no GAA background.

All elements of the membership were consulted in the drawing up of the plan. It goes from macro – €5 million needed to fund the proposed upgrade of facilities – to micro – why does men’s news always come first on the website and there’s no escaping the scale of the task.

“Because we effectively stretch from Bray to Blackrock inside the M11,” says Adrian Dunne, “we have what is probably the biggest catchment in the country and we have very few people living in Dalkey because not that many can afford to. It’s not like rural clubs where they are naturally the centre of the community. Bray to Blackrock is a fairly big community. It’s a challenge.”

Teams: 91
Pitches: 6 (one shared and all licensed from DLR County Council)