Despite being outplayed for long periods, the Mayo champions gave everything to force ET 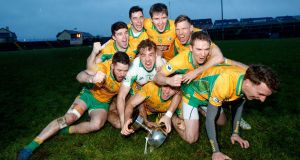 The usual deep winter epic from the Galway champions has powered them to the top of the board in provincial club championship history.

Not for the first time, Corofin took the leisurely route in what has become a gripping rivalry against Castlebar. They somehow found themselves in an extra-time dogfight despite owning the ball for long periods and with Ciaran McGrath, their captain and ferociously tidy centre-back, gone just seconds before the end of full time with injury, they suddenly looked to have fallen into a sticky place. But despite missing a penalty in extra time, they continued to play some terrific football on a wet and gloomy and afternoon and finally shook off the Mayo men to win their eighth Connacht club championship.

“We made it difficult but it must have been very exciting,” said Gary Sice, who won the penalty and guided the team in that crucial extra time period.

Sice is one of the senior figures on a team that can play brilliantly fluent football in all kinds of weather. But it was the emerging generation who stepped up here. Liam Silke had an excellent game, superior in defence and storming into attack along Corofin’s right wing and the transition play between their forwards and overlapping wing backs was unfailingly slick. They seemed set to close out the game comfortably only to be hauled back into a contest by a tenacious Castlebar performance.

With David Stenson and Neil Douglas shouldering most of the scoring duties for Castlebar, the visitors used the platform of a third minute goal by Aidan Walsh to hang tough through Corofin’s more dazzling patches and to stay in touch on the board.

Danny Kirby acted as both ball winner and playmaker and Eoghan O’Reilly put in a big shift over an afternoon when Mayo flier Paddy Durcan was too wrapped up in the defensive challenges posed by Corofin to get forward. The Castlebar defensive unit absorbed so many problems posed by Corofin that it was a wonder they had anything left for extra time.

The more you see of Ian Burke playing in the colours of Corofin, the easier it becomes to believe that there isn’t a more creative footballer west of the big river.

Even in these murky days of November, he skates across the surface of the new field. He was diligently tailed by Donie Newcombe but it would have been hard for anyone to lay a finger on the darting, quicksilver movements as Burke somehow found space in the congested Castlebar back line in the first half. And the biggest problem occurred when he had been upended. Tripped as he came to receive a pass on the run, Burke was on his feet and thinking differently as the crowd sat back to wait for the free in the 29th minute.

Michael Lundy was on the same wavelength, made a run and Burke played a sharp ball in. Lundy rounded Rory Byrne to fire Corofin’s second close range goal of the half. It was a massive score out of nothing.

And it took a huge effort by Castlebar to claw back that four point half time lead and once the celebrations die down, Corofin will take a cold look at how they finished the last fifteen minutes of normal time. They went from commanding this final to looking vulnerable to a disaster after David Stenson held his nerve to fire a 63rd minute free.

The visitors won possession and had a half-chance to turn the day completely. They probably needed to make that count. As the home crowd worried themselves in the stand, Corofin re-organised and their overwhelming squad strength began to tell.

They confined Castlebar’s scoring pair to a free apiece over that twenty-minute period of extra time. An astonishing two-decade run for the Galway club is showing no sign of letting up. A visit to London to play the cross-channel champions beckons in a fortnight’s time.

1 Betting shops face uncertain future as they prepare for Monday reopening
2 Timo Werner giving up on Liverpool dream on path to being truly wanted
3 Ian O’Riordan: An education in race and running during college days in America
4 Tianna Bartoletta: ‘After you’ve gotten your medal, you become black in America again’
5 Mature Ringrose keeping the ups and downs of rugby life in perspective
Real news has value SUBSCRIBE