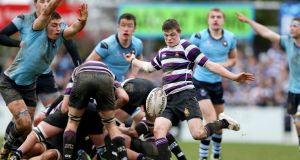 Tim Schmidt in action for Terenure College in 2014: the son of Ireland coach Joe has been included in the Ireland Sevens squad. Photograph: Dan Sheridan/Inpho

Tim Schmidt has been included in the Ireland squad for the Silicon Valley Sevens tournament in San Jose, California this weekend. The Terenure scrumhalf and son of Ireland coach Joe, is one of six new players added to the squad that finished second in a Sevens tournament in Spain last weekend.

Jordon Conroy, Shane Daly, Ian Fitzpatrick, Terry Kennedy, John O’Donnell and Mark Roche will play their second tournament in as many weeks. They face a tough pool including Samoa, England and Canada but will be looking for a progression in performance terms. They will also compete in the Invitational tournament in Dubai at the end of the month.

This season will mark the final instalment of the British & Irish Cup. A meeting between the England Championship clubs and the English RFU produced a resolution that they no longer wished to play in the competition.

It is likely to provide the IRFU with some scope to potentially stage an A interprovincial championship among the provinces at the start of the season run over eight weeks and that would then allow the academy players to return to their clubs and compete in uninterrupted Ulster Bank League campaigns.

The B&I Cup has long been a bugbear for the clubs and even with a potentially later start to the campaign, having all their academy players available on a regular basis will drive up standards and also increase the quality of the club game.