Leinster not looking to repeat history against Scarlets 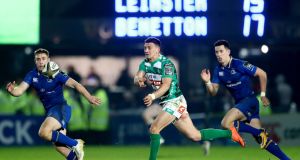 Benetton’s Tommaso Iannone in action during his side’s win over Leinster at the RDS. Photograph: James Crombie/Inpho

The rugby education process is relatively simple. Absorb the lessons in defeat or risk a similar outcome by repeating without revision.

While defeat to Benetton is hugely disappointing from a Leinster perspective, it’s a clarion call to knuckle down and prepare assiduously for Saturday’s Champions Cup semi-final against the Scarlets at the Aviva Stadium or court a repeat of last season’s heartache.

The last team to beat the Irish province at the RDS was the aforementioned Welsh club, a victory they claimed in last season’s Guinness Pro14 semi-final while Leinster also suffered the acute disappointment of a Champions Cup defeat to Clermont Auvergne at the penultimate stage of that tournament.

During the season, the Leinster players, virtually to a man, have spoken about the lessons taken from those defeats. On Saturday they have an opportunity to provide substance to their words. Leinster head coach Leo Cullen took a slightly different view. “It’s in the back of their [players’] minds; it’s quite a long time ago now.

“I’ve looked back at that footage and there’s a good few different characters. I think the mix of the teams is slightly different. Scarlets are a better team now so I hope we’ll be better now than we were last year as well.

“That’s what we’ve tried to focus on, getting better and putting ourselves in a position where we’ve ensured we’re at home for a semi-final in Europe, so the crowd, the support we get will be huge. It was fantastic in the Saracens game and hopefully it’s the same next week.”

We lost one [Scarlets] here at home, the last time we lost at home, so again that’s a painful reminder, as timely as it is. The semi-final as well when we lost against Clermont in France. we’re back at this stage, the players have worked incredibly hard. If you think back to this time last year where it was a real feeling of almost getting there but it wasn’t good enough. We need to see if we have learnt those lessons, so it’s a huge week for us.”

Cullen explained that the attention to detail is paramount, the mechanics of which will be refined in training this week. “We’re very clear about the plan in our minds going into the game. We know what potentially gets us into trouble against the Scarlets. We know on the flipside, if we get certain things right, like we did against Saracens, we can produce good moments and things in games; it’s about trying to focus on what makes this game tick.”

Wining the collisions on both sides of the ball, set piece, breakdown, game management, kicking and the accuracy in executing are the core constituents of victory. If the Benetton defeat did nothing else it offered a reminder that those who don’t appreciate history are doomed to repeat it.