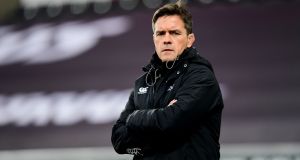 Allen Clarke: his long years at Ulster give the Ospreys coach a unique insight into his club’s rivals on Friday. Photograph: Alex Davidson/Inpho

Though the fallout from Ulster’s well-documented off-field issues continues to rumble on, the emphasis of yesterday’s weekly media briefing was purely on Friday night’s crunch Pro14 clash with the Ospreys as the northern province go in search of rare but much-needed back-to-back victories.

So, with no comment surrounding the possibility of a match-night protest outside the Kingspan Stadium, for the first home game since Paddy Jackson and Stuart Olding were cleared of rape charges – nor indeed any further mention of the current internal review involving the same two players and Craig Gilroy – talking rugby prevailed at a nevertheless clearly more security-conscious Ulster base.

And, unusually for this troubled season, there was an air of positivity around in the wake of last Friday’s unexpected, but impressive, bonus-point win at Edinburgh which has closed the gap between the sides to eight points.

With three games to go Ulster have a match in hand and still harbour notions of overhauling the Scottish capital’s squad to regain third and a spot in the Pro14 playoffs.

More realistically, though, Waikato-bound Jono Gibbes has securing fourth in his sights – though Benetton remain just a point behind – to give the province a playoff to make next season’s Champions Cup which, if achieved, could actually see them face-off with the Ospreys.

Indeed, the Welsh region have turned their season around since former Ulster assistant coach Allen Clarke took interim charge after Steve Tandy’s dismissal, a situation which Gibbes highlighted with special emphasis on just how well -prepared Friday night’s visitors are likely to be.

“It’s a unique game,” said Gibbes of Clarke’s insight into all things Ulster after the latter’s lengthy involvement at the province which only ended last season.

“I asked a question ‘who has worked with Allen Clarke as a player coming through’ and Bestie [Rory Best] stuck his hand up.

“So I said ‘there’s a guy who has had some longevity in this organisation,’” Gibbes quipped of Clarke who will be making a first return to Belfast after coaching the forwards up until the end of the last campaign.

“He [Clarke] knows the players, especially the forwards, so he’ll know what he needs to do. They will have a hell a lot of intelligence and inside knowledge on us and it’s up to our guys to make sure they rise up to the challenge.”

While name-checking Ulster performance analyst Niall Malone as providing his closely-observed knowledge of how Clarke operates, Gibbes stressed that the province must produce the same energy and intensity as was seen at Murrayfield – where they bagged only a third Pro14 away win of the season – to secure the required result on Friday evening.

“It was a good feeling,” Gibbes said of Ulster halting a three-game losing run last week.

“There is a bit of a buzz and the door [for the Pro14 playoffs] is not completely shut but we have to keep putting pressure on Edinburgh and that starts with fronting up against the Ospreys.”

“The players understand what they need to consistently do to enjoy that reward for all their effort and they are keen to back it up,” added Gibbes.

However, Ulster look odds-on to be without experienced tighthead prop Wiehahn Herbst for the remainder of the season due to a knee injury which may require surgery.

Hugely influential skipper Best, who limped off late on at Edinburgh with cramp, after a notably effective shift, is good to go for the Ospreys clash while Louis Ludik – who picked up a back injury – could still make it for Friday on an occasion which may yet prove to be Tommy Bowe’s last outing at the Kingspan prior to his retirement.