Racing 92: French aristocrats keep ahead of fashion and controversy

Paris club’s latest reincarnation has not been all plain sailing 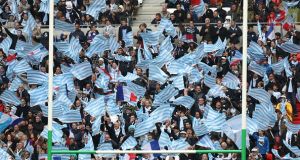 Racing 92 supporters cheer during the Champions Cup final against Saracens at the Stade de Lyon in May, 2016. Photograph: David Rogers/Getty Images

Beyoncé and Jay Z will put Dan Carter and Racing 92 out of the U Arena on May 5th. Paris can always attract a bigger superstar and Jacky Lorenzetti has every intention of turning a profit from his dome on the western outskirts of the city after last year’s proposed merger with Stade Francais fell asunder.

What on earth was he thinking?

“I have decided to give up this beautiful project,” said the real estate magnate. “I did not expect such resistance, especially internally.”

Amalgamations are nothing new for Les Ciel et Blanc. The most recent was 2001 when Racing Club De France joined forces with US Metró. Come 2015 the club name was abridged to the snappier Racing 92.

Lorenzetti, from a Franco-Swiss background and only guided to rugby by his wife’s brothers, took over in 2006. So began the aristocrats’ great revival. A fourth coming, if you will, as three titles were captured around the turn of the 20th century, with the Bouclier de Brennus not revisiting Hauts-de-Seine until 1959, while the last amateur drought ended during the Franck Mesnel and Jean-Baptiste Lafond inspired era in 1990.

Promotion as Pro D2 champions in 2008/09 ended their most recent slump. This sparked serious Lorenzetti investment in players like Sébastien Chabal, Andrew Mehrtens and Frans Steyn, all without immediate success.

Pairing Johnny Sexton and Ronan O’Gara as Mozart and Haydn shows a romantic vision exists at Racing, or at least in Lorenzetti’s mind.

Sexton has clearly recovered from the experience (although Joe Schmidt states his physical durability has not) but those two seasons cannot be recorded as successful for player or club. Injury cruelly intervened as much as Schmidt’s prompting to achieve greatness in a green jersey saw Sexton leave O’Gara to continue his fascinating coaching education without an Irish companion until Donnacha Ryan teamed up with his former Munster team-mate last summer.

O’Gara, now coaching with the Crusaders in New Zealand, more than anyone else at Racing appears to have benefited from Dan Carter’s Indian summer. This provides the truest example of Lorenzetti’s grandiose aspirations – lose the best outhalf in Europe, no problem, stump up a €1 million-plus salary to secure the greatest number 10 rugby has ever known.

Carter’s timing has proved luckier than Sexton’s – who admitted difficulties with the collective professionalism of French living when compared to the economical Irish system.

Also consider the reverence Carter would be held in, especially arriving after his drop goal interventions ensured New Zealand won the 2015 World Cup.

Success has always existed in his slipstream, and Racing won their sixth title in 2016. Only the maturing greatness of Saracens denied the domestic and European double.

What could possibly go wrong?

How about five failed dope tests in the next five months; three following a decision by the French anti-doping body (AFLD), utilising a cross-border deal with Spanish authorities, to test every Toulon and Racing player after the Top 14 final at Camp Nou in June 2016.

Carter, Joe Rokocoko and Juan Imhoff were eventually exonerated of wrong doing despite traces of corticosteroid in their urine. The World Anti-Doping agency (Wada) threshold of corticosteroid is 30 nanograms per litre – Carter’s reading was reportedly 81 per litre following, and since accepted, treatment for “knee inflammation”.

It is important to point out that this is not doping. As soon as I learned of this affair, I called Dulin to comfort him

When the information was published by L’Equipe, the French Rugby Federation (FFR) were quick to absolve all three players and Racing.

The AFLD took until April 2017 –10 months after the initial tests – before reaching similar conclusions.

“It’s been tough because there’s confidential information being leaked,” said Carter. “It’s disappointing to have to try and defend yourself when you’ve done nothing wrong.”

Racing doctor Sylvain Blanchard was also cleared with the club stating in October 2016 that Carter, Rokocoko and Dr Blanchard “did not commit any violation of the regulations, not least an ethical violation”.

Racing 92 had to weather two more doping investigations after the urine samples of French internationals Brice Dulin and Yannick Nyanga revealed traces of higenamine, which can be used for treating asthma but also improves respiratory capacity.

Dulin’s abnormal sample was taken after the France versus New Zealand match in November 2016. Nyanga’s was discovered a month earlier. Both men reportedly took the substance via an energy drink and successfully defended themselves by claiming it had not been on the banned list.

Higenamine is a banned substance on the 2016 and 2018 Wada lists in the Beta-2 agonists category.

“I guess the AFLD wants to make a wide search,” said Lorenzetti, “but Yannick Nyanga and Brice Dulin are victims. The product was presented to them as a legal substance, validated by a recognised specialist.

“We are in a crisis and the AFLD has to prove its usefulness,” he continued. “I can understand that. I know that we have to do media things if we want to exist but there is a prevention component that seems to have been neglected.”

Bernard Laporte, the FFR president, also intervened. “It is important to point out that this is not doping. As soon as I learned of this affair, I called Dulin to comfort him. This is damaging for the image of rugby and Racing because the public can connect it with a doping practice which, I repeat, it is not.”

Lorenzetti added: “The players are indignant. This product is openly advertised by Top 14 players. Yannick has been taking it for years before coming to Racing.”

During this period a special bond was formed between Racing and Munster following the tragic death of Anthony Foley on the morning of their Champions Cup Pool match in October 2016.

The teams have been paired together four times since January 2017 (see panel), with Munster winning three of the four meetings, but O’Gara, Ryan and the summer arrival of Simon Zebo seems to have strengthened ties, perhaps permanently. Incidentally, Gerbrandt Grobler came the other way, Paris to Limerick, on a one-season deal.

But Racing 92, remarkably, are a club that almost ceased to exist in its current form.

Lorenzetti, in the space of a tumultuous week in March 2017, reached an odd agreement to merge with their Paris rivals after Stade Francais owner Thomas Savare approached him.

“Perhaps we had the right plan too soon,” said Lorenzetti after the Stade squad went on strike.

“It was careless of me,” Lorenzetti admitted after an internal backlash that included an encounter with the entire Racing 92 academy squad. “I had this formula: 45 + 45 = 45, speaking of the players. I did not mean to offend people at all, but it was to say that we had to find solutions.

“In my professional life, with Foncia [his real estate company], I created 7,000 jobs. Then I left with different companies where I recreated 350 jobs. Then, with the U Arena, there are 1,000 full-time jobs planned.

“At the social level, I have no lessons to receive from anyone.”

Lorenzetti went on to express concern about outside investors coming into French rugby similar to the Qatari ownership of Paris St Germain.

“Just see football with PSG. That worried me. This was one of the reasons I found this wedding interesting.” (last summer German billionaire Hans-Peter Wild bought a majority stake in Stade Francais.)

“It’s more than a disappointment, it’s a failure, a personal failure . . . This is not dramatic because the project of Racing 92 is already sufficient for itself on our territory, in the Hauts-de-Seine.

With the merger, it would have been accelerated and secured.”

Last season disintegrated, Clermont eventually dethroning them, as the club released another statement when the doping investigations formally concluded: “All this pseudo-business has cast the shame on our players and our club by spoiling our season early. For our part, we will simply reiterate our total confidence in our players and in Sylvain Blanchard, the doctor of Racing 92.”

Recovery happened quickly, and despite Carter’s imminent departure to finish his career in Japan while O’Gara – presumably after a favourable reference from the Canterbury Crusaders’ greatest export – took off in January to go where no Irish coach has ever been before.

Racing’s revolving door of legends has become normality. The club keeps motoring along, currently second in the table, with Sunday’s Bordeaux semi-final against Munster secured in the most impressive fashion imaginable: victory at Stade Marcel Michelin.

The 36-year-old Carter proved the difference as Clermont were vanquished. Springbok Patrick Lambie started at outhalf but Carter arrived on the hour mark to win the game in two moments. First, he fended Clermont wing Peter Betham, glided inside outhalf Patricio Fernandez and with all eyes on him, flung a pass to send Marc Andreu in for the try. That made it 23-17. Seconds later Carter sliced through the heart of Clermont and offloaded. The killer score followed.

Clearly, Racing are an unusual club; swinging nonchalantly from brilliance to the precipice of disgrace, only to rapidly regenerate and find themselves on the cusp of achieving the double they failed to complete in 2016.

Munster, after Ryan and before Tadhg Beirne, stand in their way.