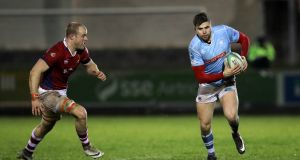 Garryowen’s reward for reaching the Ulster Bank League Division 1A semi-finals for the first time since 2009 is a trip to the national stadium to play table topplers Lansdowne. Munster Academy winger Liam Coombes scored a hat-trick in Garryowen’s 48-21 win over St. Mary’s College, which sealed their top-four finish.

Elsewhere on a typically dramatic and tense final day of the league’s regular season, Shannon ended their five-year absence from the top flight with a 40-17 bonus point victory over UCC which clinched the Division 1B title and promotion in Tom Hayes’ first full season in charge.

Tight title races in Divisions 2A and 2C went Malone and Sligo’s way respectively, as the Cregagh Red Sox gained automatic promotion with a 43-19 defeat of Nenagh Ormond, while Ross Mannion’s Sligo side took the spoils 37-0 against Thomond in a winner-takes-all clash, adding league silverware to their first Connacht Senior Cup.

Old Crescent had a stunning year as runaway Division 2B champions, achieving an 18-match unbeaten run – the first across the league since Terenure’s 18 straight wins in Division 1B in 2013/14. Crescent amassed 17 wins and a draw for an 83-point haul, which eclipses ‘Nure’s 82 from four years ago.

It was also a day of sad farewells in terms of relegation and players hanging up their boots, most notably legendary Dolphin outhalf Barry Keeshan. He is retiring after 16 years with the Cork club and kicked a conversion and a penalty in his final game at Naas, bringing his All-Ireland League record points tally to 1726. Naas full-back Peter Osborne’s tremendous 33-point haul, including two tries, would have certainly reminded the travelling support of ‘Keesh’ in his pomp.

Buccaneers, Dolphin, Corinthians and City of Derry are all dropping down a division after tough and unforgiving campaigns, while Bective Rangers went down fighting at the foot of Division 2C as they lost their senior status. Old Wesley and Tullamore both avoided the bottom two by a whisker - staying up in their divisions on scoring difference - and Galwegians also saved the best for last in their Division 2A survival mission, evergreen winger John ‘Luigi’ Cleary rolling back the years in their six-try 50-15 dismissal of play-off-chasing Cashel.