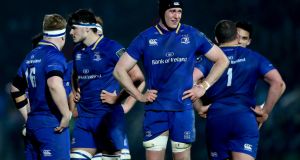 Leinster’s Ian Nagle and his team-mates during the shock home defeat to Benetton Treviso at the RDS. The visitors were 18-1 to register a victory. Photograph: James Crombie/Inpho

There will be no refuge from such a blatant performance malfunction, the imperfections of which in the glare of the post-match review may have more far -reaching consequences than a defeat or the failure to scoop up the gilt-edged opportunity and claim a home semi-final in the Guinness Pro14 with one round of matches still to play ahead of the playoffs.

Leinster needed two points to remove the mathematics from the equation. One point will suffice in their final match against Connacht to obviate the need to crunch numbers. In practical terms though, that home semi-final is all but assured.

The Scarlets, second in the conference, will be favourites to take five points from their final match against the Dragons. If Leinster return from the Sportsground empty-handed the clubs would finish level on points (70) and the next criteria to separate them is the number of victories of which they’d both have 14. It then comes down to points’ differential where Leinster boasts a 126-point advantage.

It was a minor consolation on a night when Benetton thoroughly deserved their victory. Head coach Kieran Crowley has overseen a programme of improvement not just based on results but in the development of a rounded game that would once have been considered an anathema to the forward-oriented, core values of the past.

The Benetton pack put in a Trojan performance up front and their backline stretched Leinster, arguably more often and to greater effect than the other way around.

Flanker Sebastian Negri is an outstanding athlete and rugby player, but victory was also about the collective, the bristling aggression and desire and a willingness to adhere to and trust attacking patterns that earned the milestone of becoming the first Italian team to win in Dublin in all competitions at the 18th attempt.

Benetton made a mockery of the fact that they were 18/1 and 29-point underdogs. Leinster betrayed a fundamental principle of a physical contact sport that stresses the important of winning the collisions; it doesn’t require any rugby talent per se, relying on the earthier properties of commitment and determination. It’s got nothing to do with coaching or game-plans either; taking ownership is solely the players’ responsibility.

The home side’s performance was a mishmash of mistakes that permeated, scrum, lineout, handling, game management, kicking and the crucial area of the breakdown. A fug of disappointment enveloped the Leinster dressing room in the aftermath, Leo Cullen leaving the players in silent reflection, to attend a post-mortem on the shock defeat.

The forensics led to the physical. Cullen said: “It’s probably the contact, the collision that is the biggest issue. That’s on both sides of the ball, where our nines have to dig the ball out because it’s slow; they have to peel guys off [the ball]. We just weren’t able to generate quick ball; that’s how teams come to stop us, stop us at the ruck, make sure we’ve slow ball, and we need to make sure we manage the game better if that’s the case.”

Sean O’Brien’s first game back since early March ended at the interval after taking a bang to a shoulder, a peripheral figure in those 40-minutes. Joey Carbery couldn’t have chosen a worse game to make his first start at outhalf this season in a Leinster jersey. He needs to refine and hone his game management and that can only be achieved in a match environment; he certainly wasn’t helped by what was going on, or wasn’t as the case may be, in front of him.

Cullen described Carbery’s as a “mixed performance,” before adding: “Joey did good things. It’s another step for him, a good lesson against teams like this when it’s difficult, in how we manage games.”

Slow ball begot lateral running; there was little penetration in the midfield and only an occasional spark provided by Barry Daly and Jordan Larmour.

Number eight Max Deegan stood out, a beacon that shone through a grey team performance, Larmour was similarly bright, Richardt Strauss too before his departure through injury and Jordi Murphy worked his socks off but Leinster lacked cohesion that can’t be completely explained away by the wholesale changes from the last match.

The teams scored identical tries in origin and execution, penalties kicked to the corner, mauls heading for the try line and hookers, Strauss (Leinster) and Luca Bigi (Benetton) dotting down. Carbery kicked a conversion, Tommaso Allan missed, so Leinster led 7-5.

Decisions to turn down kickable penalties on half a dozen occasions will always be parsed in hindsight when a team loses and it’ll be no different here but Leinster’s 12 points in the first half came from the calculated gamble. Jack McGrath elected for a scrum in first-half injury time and a sharp move on the short side culminated in Daly squeezing over for his 11th try of the season.

The second half belonged to Benetton on the scoreboard and in the try-scoring stakes as they managed a brace, the first from flanker Federico Ruzza and a second from Allan, who twice hacked the ball on and then won the footrace. Leinster could only muster a Carbery penalty in response.

Despite being a man down following a yellow card for scrumhalf Tito Tebaldi, the visitors tackled like dervishes, until restored to their full complement. Benetton stayed true to their expansive attacking patterns, stretching the home side and even when Leinster got to fire one last shot, it was a blank, once again turning over possession.

The Italian were deserving victors, much to the delight of their small, but vocal band of supporters who roared the team to the final whistle, the performance also acknowledged in an ovation from the locals.

1 ‘A radical departure’: Who are CVC and what are their aims with rugby?
2 Ken Early: Ken Early: Why international football is fading into obscurity
3 All in the Game: Nigeria bite back in war of words with Redknapp
4 Connell losing touch with club championship is real tragedy of Normal People
5 Colin Kaepernick’s exile is too fresh for NFL to speak out on US protests
Real news has value SUBSCRIBE