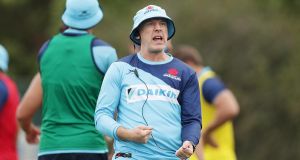 Murrayfield chiefs have also revealed they have hired the former France prop Pieter de Villiers to work as a scrum coach on a “short-term capacity” through the Six Nations.

Tandy, who coached Ospreys for six seasons until 2018, joins from the Super Rugby side Waratahs, where he helped create their famed “blue wall” back line over the past two seasons.

Taylor, who was born in Brisbane but played for Scotland A thanks to his Fife parents, joined the Scottish coaching system in 2012 from the Queensland Reds in a dual role covering Glasgow and Scotland’s defence. He was part of Townsend’s back-room team when Warriors won the Pro12 title in 2015.

He said: “I would like to thank the players and the staff of both Scotland and Glasgow Warriors for the friendship they have shown to me and my family over the past eight years. The moments we’ve shared through this period will stay with us for many more to come. The Calcutta Cup win in 2018 with Scotland and winning the Pro12 title in 2015 with Glasgow are ones which will always remain vivid.”

Scotland’s defence recorded back-to-back clean sheets against Samoa and Russia during this year’s World Cup, but the Dark Blues still crashed out at the group stage after heavy defeats to Ireland and Japan.

Tandy believes there is room for improvement, however. He said: “I see this as a massive opportunity and am very excited to fully immerse myself in Scottish rugby. Being part of Super Rugby for the past two seasons has enabled me to gain invaluable experience in different styles of rugby.

“Defence is a huge part of the game which I am extremely passionate about. With my experiences from both the northern and southern hemispheres, I feel I can add to the Scotland set-up moving forward.”

On Taylor’s departure, Townsend said: “It’s been a real pleasure working with Matt both at Glasgow and Scotland. As team-mates back at the Borders we talked a lot about the possibility of going into coaching; then we used to share notes and learnings as we began our coaching careers on opposite sides of the world.

“Matt is passionate about coaching – helping players and the team improve, and also continually striving to be a better coach. He can be really proud of a number of achievements he helped create over an eight-year period in Scottish rugby.

“We wish him all the best in his new challenge, working with the country he grew up in. I’m sure he’ll do a great job.

“It’s great to bring someone of Steve Tandy’s experience on board. He was a successful head coach in the Pro14 and added another impressive dimension to his coaching as an assistant coach in Super Rugby.

“We’re also pleased to welcome Pieter into the group. He’s passionate about the scrum and has top-level Test experience, having played for many years at Stade Français and the French national team.

“He’ll be focused on improving our scrum collectively and working closely on improving the individuals in our team.” – PA

Chelsea get over early setback to go back top of Premier League 22:24
Robbie McDaid announces himself as the next Dublin man to come around 21:16
Dublin pick Cavan off with precision and turn it in to a procession by the end 20:46
Manchester United roar back as Rashford seals win over West Ham 19:41
Wales finally pull clear of Italy’s grip in another lacklustre display 19:22
Crossword Get access to over 6,000 interactive crosswords