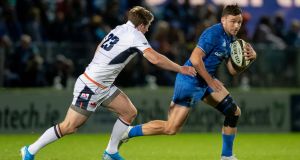 Soccer held primacy up to the age of 17 before the lure of a place on the Senior Cup team in Blackrock College managed to sway his affection. He hasn’t had cause to regret that change of affiliation. On Saturday he will line out at fullback for Leinster in a Guinness Pro14 clash with Munster at Thomond Park and in doing so make his sixth start and seventh appearance of the season.

It would be overstating matters to suggest that eschewed a potentially lucrative career in England but soccer was his first love. Playing for Mount Merrion Boys in the Dublin District and Schoolboy League (DDSL), drifting between Premier and Major Divisions, he played centre midfield before settling at centre half as he got older.

That panoramic vision of a pitch and ability to get off the ground were easily transplanted to rugby, especially when switching from wing to fullback. He thoroughly enjoyed his days with Mount Merrion Boys and was able to call upon a little advice from his uncle, Keith Dignam.

Keenan explained: “Yeah, so he would have played for Shamrock Rovers, Shelbourne and UCD, he was a brilliant footballer and he played against Everton once.” Dignam – the first ever scholarship player in UCD – was a member of the college team that beat Shamrock Rovers 2-1 after a replay in the 1984 FAI Cup final and as a result qualified for the European Cup Winners Cup.

College drew 0-0 at Tolka Park in front of 9,000 supporters and only lost 1-0 to a Sharp goal in the second leg at Goodison Park. Everton went on to win both the European Cup Winners Cup and the then First Division in England that season. Keenan continued: “His (Dignam) sons are both very good footballers; my cousin, Mark plays for the first team in UCD in the Airtricity League.

“Yeah I played (soccer) until I was about 17 just with Mount Merrion (Boys). In first, second and third year I was on the lower ranked (rugby teams) in school. I wasn’t getting near the first team so I was always concentrating on football. It was only in fifth year that I started focusing on rugby.

“You want to make the SCT team in Blackrock so I stopped playing football in my final year and just focused on that (rugby). That’s how it kicked off (in rugby) and how I made Leinster under-19s. Unfortunately I haven’t played football since.”

A member of the Ireland under-20 team – his teammates included James Ryan, Andrew Porter, Max Deegan, Jacob Stockdale, Jimmy O’Brien and Conor O’Brien – that got to the 2016 Junior World Championship final before losing to hosts, England, he made the Leinster academy but was then appropriated into the Ireland Sevens squad of which he become a pivotal and integral player.

The 23-year-old was among the core group – he played in 12 tournaments from 2017-2019 – that enabled the squad to qualify for the elite World Sevens series. He admitted: “Sevens gave me great exposure at international level at a time when in here (Leinster) I probably wouldn’t have gotten that many shots. It was about honing in on skills that I wanted to improve.

“You get so many involvements on the ball; passing, tackling, everything has to be on point with Sevens. It was great for me.” In the absence of Leinster’s Ireland World Cup contingent for the early part of the season, Keenan excelled in the number 15 jersey and will be striving to continue that form at the weekend.

A wing at school and at underage representative level his preference is for fullback where “you get a bit more space. I have always seen myself as a fullback but at under-20 level there was Jack Power or Joey Carbery in school, so I was always pushed out to the wing. I was always happy to be involved, play and get on the starting team but yeah, definitely fullback.”

He’s found Rob Kearney generous with time and help, so too Jordan Larmour as the three players look to push one another to drive up standards. Keenan’s been happy with the opportunities he’s been given so far this season. “Last season I had a good few injuries so staying injury-free is a big for me. Hopefully I can keep putting my hand up and put as much pressure on Jordan and Rob as I can.”

His only previous experience of Thomond Park was playing for the Ireland under-20 team against a Munster Development “when the stadium was empty. The lads have been telling me that playing down in Thomond is such a hard place to go, the crowd is always quite loud and hostile; I’m sure they’ll try and get into my head.

“You just have to ignore it and get on with it and I find that once you get on with the game then everything else just doesn’t really matter.” It’s a theory that will be rigorously examined. Keenan has been one of Leinster’s standout players in the Pro14 this season, an assertion he’d like to endorse again when Saturday comes.

Ken Early: Another Mourinho masterclass in going through the motions 06:30
Game Changers: Stephen Cluxton’s indelible mark on Gaelic football 06:21
Peter Byrne: A gruff exterior hid the sensitive soul and warmth of Jack Charlton 06:16
Malachy Clerkin: Sleep well Jack, you made us all happy 06:00
Mark Lawrenson: Searing honesty and a sense of being in control defined Jack Charlton 06:39
Here is your handy guide to sport on television this week