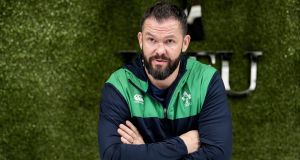 In all the speculation as to how Andy Farrell will fare in his first job as head coach, it’s interesting to hear the man himself is as curious about how it will all pan out as anybody else.

So is that when you ask him what excited him the most, Farrell’s first answer is: “Evolving. Yeah, getting better, the learnings, the ups and the downs. I am excited by it all because that’s the journey, isn’t it? That is the excitement part for me, not knowing where it is going, where the end point is and how we deal with that along the way.”

Assuming the job is, in many ways, a natural fit. Moving to Ireland with his wife Colleen (nee O’Loughlin) was far easier, he admits, than making the initial move down south from his home town of Wigan. Both he and Colleen have third and fourth generation roots in Dublin and he described it as more like moving home.

Just as pertinently, it transpires he always wanted to be a head coach. The stints as an assistant with the Lions (twice), England and Ireland were stepping stones to being a head coach and have also given him as much inside information about the Irish system and its players than anywhere else.

A contingent of 14 Irish players first came across him on the Lions tour to Australia in 2013 and ever since all who’ve worked with him have been struck by his straight talking manner. He’s amiable and easy going, but with his booming voice and clear messages has been likened to Paul O’Connell for his voice within the camp. None of that is going to change.

“I can only be myself,” he told some of the Irish press corps during the week. “I want to be upfront with you guys and the players. I’m not clever enough to lie to myself. I want to be honest and be upfront. I can only be myself. As far as how I’m going to run this gig, I’ve been in professional sport for most of my life, since I was 16 years of age.

“I’ve always wanted to be a coach, no matter what code that would be in. I’ve had some unbelievable experiences along the way. Some fantastic, innovative coaches. Some brilliant man managers etc, and I take all that into stock.”

Being a head coach was also a natural for someone who was first made captain of the Wigan and England rugby league sides at the age of 21.

Contrary to popular perception, Farrell has never been a rugby league coach. Switching to union as a player before his 30th birthday, first with Saracens and then England, all Farrell’s coaching has been in the 15-man code, beginning in 2010 with a spell as the Saracens skills coach.

He has worked with Lancaster, Warren Gatland and Joe Schmidt, as well as Simon Easterby and newly appointed backs’ coach Mike Catt along the way, and won’t be shy about talking to the them or others.

“I would spend my time speaking as many people as I possibly can, not just in coaching – in business and in life. People that I meet in the gym and try and get my learnings from that. Every book I would read, every podcast I would have. It’s all about learning and getting better for this profession. I was 28 when I came over from rugby league and I had a long enough career from 16. I’m nearly 45 now, you know?”

He regards himself as privileged that his son Owen, who was born when Farrell was just 16, was able to see his career, although ironically has never coached him or indeed his other son, Gabriel, who he leaves to his own coaches.

“My boy now, Gabriel, who is eight, he’s at Old Belvedere and I just stand there on the sideline and the parents are coaching there. They turn an eye to me every now and again, and I just laugh. I enjoy watching parents getting stuck in. I would never interfere. If anyone asked me for some advice I’d gladly (give it) but I wouldn’t want to be a parent that’s interfering from the sideline.”

His respect and admiration for Schmidt remains undimmed.

“I’ll speak to as many people as I possibly can the whole time and when you’ve got Ireland’s most successful coach on your doorstep ... Joe’s a friend of mine and someone I’ve admired from afar when I’ve been working against him before. I always wanted to spend time with him and I was privileged enough to do that and work with him. He’s literally 10 minutes away from the office. But again, at the same time I’ll make sure that I’m my own person as well.”

Unlike Schmidt, Farrell won’t have an autumnal series with which to bed in his ideas, but rather he’s pitched in immediately into a Six Nations Championship.

“Well that’s international rugby, we all know that before we put our foot forward for the gig. You’re dealt with those cards and you make the most out of them. That has to be in your planning.

“I suppose the key for us is, yes, we want to progress and add to our game as everyone would want to do every season anyway. But we’ve got to make sure we take those steps without trying to push forward too fast and end up standing for nothing, just add as we go and hopefully we get a good response to that.”