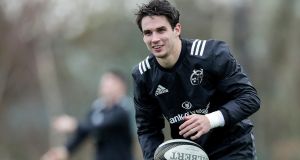 Joey Carbery: Munster will be looking for a big display from the outhalf against his former team-mates. Photograph: Laszlo Geczo/Inpho

This December derby, taken in splendid isolation, has provided a launchpad for Garry Ringrose and Jordan Larmour to showcase their dazzling gifts.

Both return to Limerick as established members of a Leinster team looking a little closer to its best European selection than a Munster group shorn of Peter O’Mahony and Chris Farrell.

At least both sides are stronger than in previous incarnations of this festive gathering. Johnny Sexton leads the double champions into 2019 with Ciarán Frawley, interestingly, named as cover to the World Player of the Year.

Sexton, Larmour and Ringrose are gelled by Rory O’Loughlin, rewarded for recent showings with a start at inside centre (Robbie Henshaw is due to recover before the Six Nations concludes).

Munster do offer strong resistance as Conor Murray and Joey Carbery’s fledgling partnership is invited to click. Their symbiosis seems essential in a World Cup year that demands nothing short of greatness.

For Carbery the focus can narrow. He must kick his goals to ensure the recent Castres experience, landing three from six in a one-point defeat, gets labelled blip not pattern.

The hosts’ back field – Mike Haley, Andrew Conway and Keith Earls – has more than covered the loss of Simon Zebo with Haley due increased exposure to Ireland camp, if not the match-day squads, in coming months.

The only pity is Farrell and Ringrose will not collide on this occasion. Their rivalry for Ireland’s No 13 jersey had shaped into a genuine argument until Farrell’s injury-cursed career was again interrupted by knee damage last season. He returned, looking as physically dominant as ever, only to pull up with quad problems.

Watch this space but the national slot belongs to Ringrose.

All this backline talk is preamble to the real war.

Up front, Tadhg Beirne knows his time is now, especially with Iain Henderson ruled out for three months following thumb surgery. Beirne has been world class in Munster red this season, adding lineout prowess to an unmovable presence over opposition ball.

Before November calls were loud and sustained to put Devin Toner out to pasture but, of course, victory over the All Blacks made such a suggestion seem foolish. Toner and James Ryan are the resident Ireland secondrows with Henderson providing ideal cover.

None of these men, not even Ryan, can be considered the form lock on this island. That would be Scott Fardy. Leinster’s treasure trove of talent earning back-to-back wins over Bath as Leo Cullen left Fardy out of both European squads – that damn employment rule and Jamison Gibson-Park’s value at scrumhalf forced Cullen’s hand – seems almost unfair.

Of late Fardy has been phenomenal in the less seen matches that Isa Nacewa used to will young Leinster sides past the winning post. These so-called second stringers are full of surprisingly well-rounded players who followed the former Wallaby deep into multi-phase defeats of Treviso, the Southern Kings, the Ospreys and the Dragons.

The last two scalps resulted in a combined tally of 111-17 with Fardy looking every inch the blindside, masquerading at lock, that helped Michael Cheika’s Australia reach the 2015 World Cup final. Now that the former Leinster coach has survived the night of long knives Down Under, a recall for his 34-year-old lieutenant must be imminent.

Seven of this Munster pack are expected to start in Gloucester on January 11th so they might deny his ruck effectiveness, and rupture Leinster’s now routine dominance of possession. Unlikely.

Fineen Wycherley is retained as O’Mahony, presumably, gets extra time to heal following a brutal 2018 leading Ireland to glory upon crowing glory. CJ Stander takes over captaincy in his absence.

“We’ve been looking forward to this for a long time,” said Johann van Graan as the Munster coach seeks consistency from a campaign that has recently faltered with defeat to Castres followed by the loss in Belfast on December 21st.

“Champions of Europe and the Pro 14, they are clearly way above the rest at this stage. Just look at the team that beat the All Blacks: Leinster had 13 and Munster had four. Massive challenge for us.”

Still, Munster remain in control of their European destiny – two gruesome English duels approaching – and lie second in Conference A of the Pro 14 with seven wins from 11 outings.

That, equally, highlights the differences between these old rivals. Leinster are destroying the domestic competition with 400 points accumulated (56 tries), and only 177 conceded, in 10 wins from 11. Only Toulouse in Toulouse could sufficiently stall their relentless march.

Van Graan is right, Leinster are peerless these days. Munster are not desperate to realign the old balance of power – that may no longer be possible – they only want to prevent the sacking Thomond Park for a third time in four seasons, and keep another Ringrose or Larmour from announcing himself on their patch.

Maybe Carbery can fill that role. The stage is certainly set. If not, the current order will continue as Leinster batter a Munster offence that has lacked scoring accuracy at crucial moments. That’s the obvious difference. Isolate logic, as only this fixture can, and an uncomfortable Leinster victory could be denied.