Connacht determined to return to winning ways against Ulster

After being pipped by Leinster, Friend’s side targeting a notable double 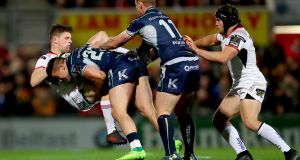 Ulster’s Angus Kernohan is tackled by Cian Kelleher and Matt Healy of Connacht during the clash at the Kingspan Stadium earlier this season. Photograph: James Crombie/Inpho

Connacht are looking to make a swift recovery after their heartbreaking loss to Leinster when Ulster arrive at the Galway Sportsground on a revenge mission this evening (7.45pm).

Ulster coach Dan McFarland returns to his old stamping ground with a point to prove, having been in charge at Kingspan Stadium when Connacht wiped out a 58-year unbeaten record with their gutsy 22-15 victory earlier this season.

That Connacht resilience will be needed in bucket-loads again this evening against an Ulster side that has found sufficient momentum to propel them into second place in Conference B. As a result, Connacht can expect a real battle if they are to record an historic double this season.

“Ulster will be wanting to change that result in Kingspan back in October, so we know they will come with a very physical side, it’s the way they play,” says Connacht coach Andy Friend.

“They look after ball and try to bust through you, so we are going to have to front up physically and mentally.

“When we have the ball, we have to make sure we do what we did against Leinster, back ourselves, carry with purpose, get in behind them and move the ball, and keep trying to play attacking style rugby rather than close up shop.”

However keen Connacht will be to put pace on the ball, they will be confronted by a well-schooled McFarland pack.

“They have their own game style, we have ours. We know they are big men and we need to win that gain-line collision. If we can dominate that, and our set piece has been going very well, and if we can continue on that vein, we will be a tough team to beat at the Sportsground.”

Certainly the home crowd with their festive spirit will play its part in what is expected to be a packed Galway Sportsground.

Friend admits it is now a “massive game” in Connacht’s bid to keep pace with the Conference A leaders, even with the help of the “Connacht clan and the terraces to spur the boys on more”.

“We said at the front of the interpros, these are important [games]. If we can beat Ulster this weekend, it keeps us in the hunt. That is our goal. We won’t consider anything but winning. We thought we would win the Leinster game up until the 69th minute.

“We know our game is developing and for large percentages of fixtures we are playing the type of rugby we want – arresting a two-try post half-time free-fall in Perpignan, putting up good points against Leinster – but we need to tighten up and make sure 17 points don’t go the other way.

“We know there will be a big home crowd in the Sportsground and we will need to be up for the occasion. This block of fixtures is hugely important in the context of our season, but we are not looking beyond Ulster.”

Both coaches have made four changes from the teams that opened the festive derbies.

Cave forms the midfield with Will Addison, while Kernohan starts on the left wing for Robert Baloucoune, who has been banned for two weeks following the Munster clash. And with right wing Henry Speight making his final Ulster appearance before returning to Australia, McFarland also will be looking to put more width on the ball in a bid to stretch the Connacht defence.

Nick Timoney is the only change up front, joining Jordi Murphy and Marcell Coetzee in a physical backrow that is charged with stopping Connacht’s attack, while the front five remains unchanged, and includes hooker and captain Rob Herring.

In contrast Friend has made his changes to the pack, hoping the return of Quinn Roux and Sean O’Brien will counteract some of that Ulster power up front, aided and abetted by hooker Shane Delahunt, who comes in for Tom McCartney, and Conor Carey for the rested Finlay Bealham.

And in Paul Boyle, Dave Heffernan, and Ultan Dillane, Friend has more dynamism on the bench, where on-loan player from Munster Stephen Fitzgerald is also named.

Fitzgerald joins centre Tom Daly, and Aengus Lloyd as loan players who have joined Connacht in the last two weeks due to injury issues in the midfield and halfback.

“It’s really important to have these Irish qualified players who can step into the breach, thanks to the good relationship we have with other clubs. A lot of people don’t understand that to get a foreign player takes at least six weeks just to get a visa, and we can’t wait six weeks.”

Both sides, having suffered injuries this season, are making progress under their new coaches, and will view this post-Christmas fixture as a real opportunity to go into the new year in winning form.

Connacht showed some real speed and accuracy against Leinster for 64 minutes, while Ulster avenged their earlier humiliating 64-7 loss to Munster. Thus Dan McFarland has named a stronger squad, but one with the same aim of gaining revenge for that home defeat.

The Galway Sportsground is a tough place for any team to visit, but Connacht know they will need to deliver equal measures of pace and physicality to record the double over Ulster.