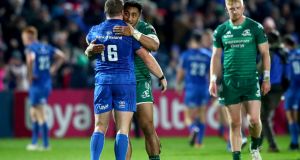 Leinster’s Sean Cronin and Bundee Aki of Connacht at the final whistle after Leinster’s last-gasp victory at the RDS. Photograph: James Crombie/Inpho

After Friday’s comparatively dour, bad-tempered armwrestle in Belfast, Saturday’s rollicking, rollercoaster of a game at the RDS – a true Christmas cracker if ever there was one– has injected further intrigue into the festive series of interpros.

Had Connacht completed a famous win, something they looked odds-on to achieve after thrillingly constructing a 17-point lead with a dozen minutes remaining, they would have moved alongside second-placed Munster in Conference A.

As it was, Leinster’s salvo of three tries completed a 33-29 win in the Guinness Pro14’s game of the season thus far and extended their lead over Ulster in Conference B to 16 points.

Although Connacht picked up two bonus points to move within three of Munster, the Ospreys edged above them with a 19-12 win over the Scarlets.

One of the vagaries of the Pro14’s Conference system is that it gives Connacht additional derbies against Leinster and Ulster, whereas it gives the Ospreys the same against the misfiring Scarlets and the Dragons, whom they meet next Saturday.

By contrast, Connacht and Munster host Ulster and Leinster next Friday and Saturday at the Sportsground and Thomond Park.

A breathtaking encounter at the RDS left Connacht coach Andy Friend reflecting on a “gut-wrenching” defeat.

But even Leo Cullen appeared more drained and relieved than euphoric after Leinster’s biggest act of escapology since the famous 2011 Heineken Cup final comeback win over Northampton.

“It was pretty stressful for us watching in the box, but I’m glad everyone else is happy,” he quipped wryly. “It was an amazing crowd there, amazing atmosphere from the very start of the game. It’s a pity our players, or all of us, couldn’t build on it from a little earlier in the game.

Leinster’s talented young fullback Hugo Keenan, who had instigated their best period in the first half, was their one casualty of the night with a collarbone injury. But, unlike previous festive periods, the decision to rest the majority of his frontline players will presumably enable Cullen to pitch up in front of a sold-out Thomond Park relatively locked and fully loaded.

“I watched Munster last night,” added Cullen in reference to their 19-12 defeat away by Ulster in which Johann van Graan had also rested his frontline players.

“They had a lot of guys that they didn’t play at the weekend so I’m assuming that they’ll have a lot of guys coming fresh into the game. So it’s going to be a great challenge for us and Munster will be smarting coming off the back of a couple of losses, and that’s when they’re at their more dangerous, as we all know. It will be a great test for us.”

This, admitted Cullen, had been an altogether different kind of test for the core of young players who had run up 50-pointers in wins over a depleted Ospreys and the Dragons.

But in the most draining, meatiest part of the season, more than anyone Leinster have the strength in depth to cope.

Nevertheless, this performance added to the feeling that Connacht are the most improved side in the competition this season. And, in the view of Jack Carty, they remain genuine play-off contenders heading into the forthcoming home games against Ulster next Friday and Munster on Saturday week.

“When we went over to South Africa we said if we lost them two games our season would be very tough to get out of there. If we won one we’d be there or thereabouts, and if we won two we’d be right in the hunt, and we won the two.”

“This target was to win all three of these games. We fell short today, but we’re going to have to win our two homes games now against Ulster next week and Munster the week after. They’re going to come fully loaded. We just need to recuperate from tonight, and look what we can do from those last 15 minutes, and take the positives from that [first] 65.”

And if nothing else, this near miss will reinforce the desire amongst Connacht players and supporters alike for those home derbies, the first of which offers the opportunity to complete an historic first double over Ulster.

“Yeah, we’re looking forward to that mate,” said Friend of Friday’s game. “Ulster in six days’ time. They will come fully loaded, we know that. Back at the Sportsground, hopefully we will get a win there.”