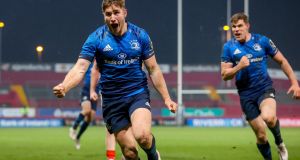 On a wet, Baltic night in Limerick, Munster and Leinster locked horns like two stags for 80 minutes but the men in red couldn’t break the rut, as the three-in-a-row Pro14 champions made it five wins in a row.

Enjoying a huge return from Conor Murray’s box kicks until he was replaced for the endgame, Munster exploded out of the blocks and were 10-0 up inside 12 minutes. But, amid shades of the semi-final last September, they were kept scoreless thereafter, although they will rue a missed JJ Hanrahan penalty at 10-6 as well as four costly lost lineouts.

They will feel a huge sense of anti-climax after expending so much effort, not least in defence as they twice repelled huge forward drives by Leinster. But that also underlined how much Leinster grew in the game and kept their composure.

Needing something to break the deadlock, a superb try assist by Hugo Keenan enabled Jordan Larmour to dance in for the decisive 70th minute try.

It was absorbing, but in truth defences were otherwise on top amid a feast of box kicks and straight carries into willing tacklers.

For the watching Andy Farrell and newly appointed forwards coach, from their vantage point just in front of the press box, the most disconcerting sight of the night was Johnny Sexton being taken off with what seemed like another leg or hamstring injury.

Otherwise, key men looked in good nick, not least Tadhg Beirne, Peter O’Mahony and Conor Murray, while the back three options now look more plentiful with Keenan underlining his continuing upward graph, and while Larmour’s footwork impressed he had a difficult night under the high ball, where Shane Daly and Mike Haley excelled in that and much else.

Robbie Henshaw and the fit again Garry Ringrose were also impressive, as was Andrew Porter (putting in another 80 minute shift) James Ryan and Luke McGrath, although Rhys Ruddock, Caelan Doris and CJ Stander did not have their expected impact.

The pre-match flurries of snow for the, eh, warm-ups, gave way to mere rain by the kick-off, but that soon stopped altogether, ensuring a dry first-half on a previously dirty January night.

Last time they met Munster copped plenty of criticism, not even that thinly veiled by Leinster, so Johann van Graan could have been forgiven for smirking under his mask as not only did Mike Haley confidently deal with Luke McGrath’s first two box kicks, but Munster also reclaimed Conor Murray’s first three to telling effect.

A kick, of course, is only as good as the chase and the pressure from each of the Munster back three in turn contributed to Luke McGrath, Jordan Larmour and Jimmy O’Brien all knocked on.

The first led to a quick lineout by Conor Murray and a carry by CJ Stander, with Rhys Ruddock pinged for not rolling away and JJ Hanrahan struck a fine 48 metre penalty.

After reclaiming another Murray up-and-under, although the Munster frontrow seemed a little too high, a second successive shove earned a penalty. Just out of Hanrahan’s range on halfway, he went up the line instead and Murray sparked a siege on the Leinster line with a strong carry off the lineout before Tadhg Beirne, with the very prominent Peter O’Mahony latching on, just made the line under the posts for a seven-pointer.

All the early lines in the sand were being made by the Munster pack, although an overthrow and a James Ryan steal prevented them from maintaining their early momentum.

It was fully 15 minutes in before Leinster had their first possession of note from a scrum on their own 10-metre line, and Robbie Henshaw cross kicked out on the full when Jimmy O’Brien was in space.

Even when Henshaw brilliantly reclaimed Sexton’s towering up-and-under, McGrath promptly kicked down Shane Daly’s throat and he found a monster touch from his own 22 to nearly five metres from the Leinster line.

Leinster worked their way upfield again, beginning to find their recycling rhythm as Sexton began to pull the strings. O’Mahony won a superb clean turnover but the ball having been taken back in, Haley’s huge touchfinder went out on the full.

Leinster’s carriers were often being tackled on the gainline, or even behind it, but Leinster upped their intensity, Ryan blowing Beirne away with one clear-out before the latter was soon pinged for not rolling away.

Sexton opened Leinster’s account and then resorted to a huge bomb in the face of stiff defence which Haley, for the first time, couldn’t gather under pressure from Hugo Keenan, and Earls had to be alert to Ringrose’s clever grubber and chase.

Andrew Porter and co responded to the earlier indignity to earn a scrum penalty which they kicked to the corner. Their lineout, unusually, misfired and Sexton had to claim the overthrow.

From another penalty they went for a scrum to resume their pack’s assault but they were pinged for not releasing as Rhys Marshall went for the poach. Ruddock looked none too impressed with Andrew Brace’s decision but it drew the biggest roar of the half from the Munster support staff in the stand and the replacements keeping warm in the in-goal area at the other end of the pitch.

It also energised their pack, who mauled strongly, before Murray cleverly trapped Caelan Doris at the base long enough to earn a penalty. Almost from the identical spot as his first penalty, maybe a metre closer and in over time, Hanrahan had the distance even more comfortably, but the ball cannoned off the upright.

Instead Marshall was pinged for an apologetic no-arms tackle, when he clearly slipped, to give Leinster one last attack from deep. After typically adroit footwork from Larmour, James Cronin was penalised for not rolling away and Sexton nailed a 40-metre penalty with the last kick of the half, the six-point swing easing Leinster’s annoyance over not earlier drawing level.

At Munster for 10-6, it also left matters nicely balanced.

The second period began similarly to the first, as Murray’s bombs earned a big dividend as first Larmour wrongly elected to leave the first and then an airborne Daly wonderfully reclaimed the second from over the touchline.

A multi-phase attack, Coombes making a couple of big carries and Munster working the ball to O’Mahony on the touchline, but Hanrahan’s hooked a penalty wide from the 22.

Daly turned another Murray box kick into an attacking penalty but again Ryan picked it off, which must have caused new Irish forwards coach Paul O’Connell, watching the game with Andy Farrell from their vantage point in front of the press box, mixed feelings.

Niall Scannell and David Kilcoyne then had half an hour to impress the latter two, as did Rónan Kelleher, while Ross Byrne soon replaced Sexton, who was shaking his head after receiving treatment on what seemed like a leg injury. The end game was thus entrusted to Ross Byrne and, before long, Ben Healy.

From Garry Ringrose’s kick ahead, McGrath and Keenan’s chase forced Haley over the line to earn a five-metre scrum. The Leinster pack again went into overdrive and seemed set to score, but once more Beirne was in the jackal in trademark style to earn a huge relieving penalty.

Leinster’s 6-2 split meant Jamison Gibson-Park had to replace a Jimmy O’Brien on the wing before Haley’s monstrous touch-finder and Gibson-Park’s quick tap and run from deep changed the momentum again in turn.

But Byrne twice kicked away possession as the game became a midfield stalemate entering the last quarter.

As things stand this is their only scheduled clash this season but somehow one senses they’ll meet again - just don’t know where, don’t know when.

McFarland will speak to referees’ manager about Warwick red card

1 McFarland will speak to referees’ manager about Warwick red card

McFarland will speak to referees’ manager about Warwick red card 05:00
Frustration for 14-man Ulster as Leinster machine rolls on 01:00
Leopardstown planning a ‘technical’ review of steeplechase course 01:00
Fitting tribute to Jerry Kiernan as Irish athletes leave it all on the track 01:00
Nicola Sturgeon condemns ‘disgraceful’ scenes as Rangers fans celebrate 22:11
Here is your handy guide to sport on television this week