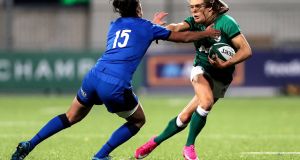 Beibhinn Parsons possesses the attacking chutzpah that enchants teammates, coaches and spectators alike. A more tangible return is scoring tries so the three she crossed for in the curtailed 2020 Six Nations Championship underlined her importance to the national team.

Parsons matched flair with freedom of expression and in those circumstances there is always a balance to be struck between enough and too much, especially when fuelled by impetuous youth. It should never be subdued, just harnessed correctly, something of which her father reminded her at Christmas.

A deserving winner of the Guinness Rugby Writers of Ireland Women’s Player of the Year award, Parsons explained: “My dad gave me a good piece of advice when I left at Christmas, ‘just play like a kid.’ At 19-years-old, she doesn’t have to trawl back too far.

The Ballinasloe winger continued: “I think I lost that (at stages) I was trying to be too serious, trying to play a different game, be a different player, a playmaker which I am not; I am a finisher. To make sure that I express myself on the pitch is something that I am working on. I don’t want to be boxed in.”

Part of that required a commitment to evolving as a player, developing other skills that complement her pace, footwork and angles of running. Parsons said: “I have been working on adding more of a kicking game, grubbers and chipping that type of stuff. Ellen Murphy is like an expert on kicking so I am always picking her brains, the same with Kathryn Dane. I am learning from the other girls and adding more tools to my tool box.”

She is unfazed by the uncertainty surrounding the women’s game at the moment, the postponement of the 2021 Six Nations until later in the year and the lack of specific dates for the Rugby World Cup which will be held in New Zealand in September while the qualifiers may take place in March.

“You’re building towards something, intensity is rising, competition within the squad is rising and you are getting ready for a huge tournament and when that is pulled from under you, you are disappointed. With the year that’s in it we have become a really resilient squad. We are used to the goalposts changing at this stage.

“We had our moment, we got over it and now we are focused on World Cup qualifiers. That has always been our main focus; we are working hard, training hard. The goal hasn’t changed whatsoever.”

It’s a mature outlook, something that comes across clearly in her interview. She doesn’t sweat stuff that’s outside her control from the cancellation of the Leaving Cert last year to not having the traditional first year of college life because of the pandemic. She looks at the silver linings not the clouds.

“I look back on it with lots of fondness, I had the best of both worlds, to be able to play my part in the first two Six Nations matches, study as if my Leaving Cert was going ahead and now I am in college in UCD, part of the Ad Astra academy. Everything really worked out well for me in the end.”

Later, when asked about the difficulties of not being able to socialise in college, a rite of passage that’s hugely enjoyable for most, she said: “the student experience is limited (but) it is suiting me down to the ground. Going out wouldn’t fit in my schedule.”

Parsons was supportive of the stance taken by Harlequins and Ireland Anna Caplice recently in calling out trolls on social media who basically said that no one cared that the Women’s Six Nations had been postponed. “The fact that she (Anna) had the bravery to do something like that on such a controversial topic, yeah I was really proud to call her a teammate. Anna articulated herself really well in the post and it was really powerful.”

The teenager pointed to the fact that some of these people have no idea of the sacrifices made just to play the sport, holding down jobs, rearranging work schedules simply to be at training, never mind matches. Others simply don’t care.

On a personal level she hasn’t experienced any kickback. “Honestly, no. I have been lucky enough; either I haven’t seen it or it hasn’t been posted in the first place. I don’t tend to go on my phone around game-time. I don’t like the distraction of it.

“Beyond what my family, coaches or teammates have to say I don’t really engage with much else, good or bad.”

The Irish squad will throttle back a little over the next fortnight, waiting for that green light, the clarity of when the World Cup qualifiers will take place. In the meantime Parsons will work diligently on the player that she wants to be; and that’s an exciting prospect given her talent.