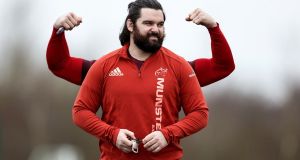 Munster and its supporters could be forgiven for feeling a little fed up of the rivalry with Leinster lately. Leo Cullen’s side have won the last four meetings, putting them within one of equaling the postwar record five-in-a-row achieved in 2009 and 2010, and have won eight of the last nine, including three successive League semi-finals.

Yet, as much as ever, Munster are clearly relishing the task awaiting them next Saturday at Thomond Park (kick-off 7.35pm). In the 20 year history of this competition, there’s never been a better benchmark than the three-in-a-row champions.

Hence, when Johann van Graan was asked to pinpoint Leinster’s biggest strength he paused at length.

“They play a very pressurised game,” he then said, before going on to explain how this pressure comes in many forms.

“Scrum and maul, they’re potent. Once they get scrum penalties, they get into your half, then they either maul you or they’ll play off that six-man [lineout] of theirs which they get into the vacuum, which they do very well with their centres. Then their phase-play, once they get on to a roll it’s very difficult to stop.

“If they get a penalty, Johnny [Sexton] either kicks the three or they’ll go to the corner and maul again. So, they’ve got a very solid kicking game. They vary it very well off ‘9’ and ‘10’, whether they go long or short, and they’ve got a very specific way of defending – of getting 14 guys on their feet. And they’ve got very good decision-making as to when to poach and when not [to poach].

“They’re very experienced as a group, internationals all over. They’ve got young guys like Hugo Keenan that have come in seamlessly and played some terrific rugby. And they’re a proud club with a very good coaching team.

“It’s one of the clubs in world rugby that I respect. You have to respect quality and you have to respect standards and that’s what they’re about. That’s why they’re currently top of their European pool and have won the Pro 14 the last three years.

“So we’re under no illusions as to what awaits us, and that’s what you want to be measured against, the best, and quite clearly they are currently the best.”

A fortnight later, in the semi-final, the same two players received four passes. Conor Murray box kicked 11 times, and Craig Casey once, and often from around, or inside, halfway. Leinster’s scrumhalves box kicked 11 times too, but mostly as an exit strategy.

Munster copped flak, their former playing legend Peter Stringer noting there seemed to be no plan B, while an exasperated Leo Cullen referred to the relentless box kicking.

“No, not at all,” he maintained. “At the end of the day, all of us as coaches are in the same boat and we’re looking for our teams to win and you’re looking for some sort of edge.

“Obviously, they’ve a very aligned coaching team who believe in a very specific way of playing the game. But I believe all teams do 90 per cent the same thing in different positions and will do what’s needed to win. Fair play to them, they won that semi-final and became the champions after that.”

Before Christmas, Munster unveiled a variety of strike plays in Clermont, none better than off a lineout for the Mike Haley try which launched the comeback, and a pleasing blend between forwards and backs in phase play. That kind of approach would seem to carry a better chance of success.

“We created opportunities in the semi-final but we didn’t use them. So as a group we worked on them and the Clermont game is a good example of when you stand the fight and when you take the points. If you win it in the last 10 minutes, that’s why a game is 80 minutes long.

“We’ve played some pretty good rugby and we’re pretty happy with where we are at. Unfortunately a season is so long, you have to take it week by week. It doesn’t help to pat yourself on the back about what you’ve done because we haven’t achieved anything.

“It’s a good start to the season, we are number one currently in our group but that counts for nothing on Saturday evening. There are four or five points up for grabs. It’s obviously a big game in Irish rugby and one that I’ve personally enjoyed since coming to Ireland.”

Hopeful of retaining the majority of their out-of-contract players, Van Graan added: “I won’t do my job if I don’t mention the environment we are currently in, not only in Ireland, but the world.

“We speak about it every day, when you get stopped by the Gardaí and say you are driving to work, we’re just so fortunate we can play rugby and it’s the same for the opposition. Unfortunately our supporters cannot be with us but a lot of people, not only from Munster but from Leinster and all over the world, will be watching this game. That’s always a privilege to be part of.”