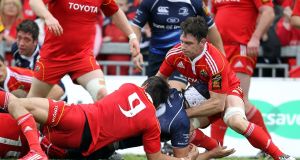 Back in May 2011, Leinster produced their finest comeback when beating Northampton in Cardiff to claim their second Heineken Champions Cup. A week later, seeking a double in the Magners League final at Thomond Park, Munster were waiting for them in the long grass.

It was always going to be a huge task for Leinster and a fired-up Munster ultimately outlasted them, scoring three tries to nil in deservedly winning 19-9.

The balance of power had started to tilt by then, Leinster’s seismic European semi-final win in front of 82,208 at Croke Park two years before sparking the first of their Heineken Cup successes and a five-match winning run over their old rivals.

While Munster ended that sequence eight weeks earlier with a 24-23 win at Thomond Park, come the final they simply had to win.

“It’s obviously tougher for a team coming off the high of winning a European Cup the week before and the other team is salivating and waiting for you,” admits David Wallace, who had a barnstorming game that day. “All the chips on the shoulders were firmly in place by the time they came to Thomond Park.”

Sadly, a bad knee injury sustained in Ireland’s final World Cup warm-up game against England would effectively end his career, restricting him to three more appearances. Probably one of Ireland’s three greatest number sevens along with Fergus Slattery and Seán O’Brien, and at the peak of his considerable powers, he would have given Declan Kidney another backrow option at the World Cup on those firm Australian pitches along with Stephen Ferris, O’Brien, Jamie Heaslip and Denis Leamy. Some thought that.

“The family were all there and I think it was the only time my son Andrew onto the field after a game. I carried Harvey around as well. I hadn’t done that before. I didn’t know it was going to be my last real game so it was nice to share that moment with them too.

“It was my 200th cap as well, so it was a nice way to finish up, and in Thomond Park with a full house. You can’t get out of the house now, never mind a full house,” he notes, dryly.

The atmosphere was electric, a constant hum from first minute to last interspersed with silence for kicks, and full-hearted roars, not least for each of Munster’s tries as well as a pivotal third quarter defiant stand in their own 22.

“Those are the days that you live for. At that time of the year it gets a bit warmer and milder. The ground is firmer and it’s a pleasure to play in that weather, but then you add in the crowd and the occasion, and it would be hard to top that game,” says Wallace, who ranks it alongside the 2006 and ‘08 European final wins over Biarritz and Toulouse.

Lifeimi Mafi, partnered by Danny Barnes in midfield, was on fire, and set the party in motion when goose-stepping Eoin Reddan before putting Doug Howlett over for his 14th try of the season. O’Gara added an astonishing touchline conversion into the wind.

“In the position he played, Lifeimi didn’t always get the space, but he could do that. He scorched him. That’s what you need to break down a team like Leinster because they’re normally so solid. And Dougie with the tight hair cut.”

Munster didn’t score again for over 50 minutes, during which time Johnny Sexton kicked three penalties, but the last quarter was all Munster.

As with the first try, after again trucking line-out ball up the middle, Mafi went back to the blindside. “That was something we tried to do on the day off a line-out, hit up the middle and go back blind on what we called an ‘elevens’ play,” says Wallace.

With an advantage play O’Gara crosskicked perfectly for Keith Earls to gather and step inside Isa Nacewa before swivelling over Shane Horgan’s tackle.

“It was a class kick pass to Earlsy and he had a lot to do. No better buachaill. He looks the exact same player. He doesn’t look like he’s aged at all. He’s still as spritely.”

“Jeeze, we hammered them in that scrum. Wian du Preez and (John) Hayes, that’s some scrummaging. A nice way to win it too, because there’s not many days you do that to Leinster.”

The post-match celebrations were given a poignant twinge by the presence of their head of strength & conditioning, Paul Darbyshire, who passed away from Motor Neurone disease less than a month later.

“His son Jack was there as well. Very, very sad. That was the last time a lot of us saw Paul. A horrible disease and a few other rugby players have had it or have it at the moment. I did see something that they’re having a little bit of a breakthrough in Scotland in the treatment.”

Munster had won 19 of 22 matches, topping the table by 13 points from Leinster so for fans and team alike, losing wasn’t an option.

“We had every advantage, playing at home, and we had an awful lot more to play for, and there wasn’t much, if anything, between the teams, so we should be winning that game really.”

Wallace is still living in Limerick and is now working in the construction industry, with I3PT. “I’m really enjoying it; great company.” He and his wife Aileen have three kids, Andrew (12), Harvey (ten) and Julia-Rose (seven).

He’s done a little punditry, popping up on Premier Sport for the Autumn Nations Cup, and stays in touch with some of his team-mates in a WhatsApp group. Indeed, during the first lockdown, Ronan O’Gara sent on a link showing that 2011 final.

“I flicked it on and got the last 20 minutes. I shouted to the boys: ‘I’ve a Munster match on here that I’m actually playing in.’ And they had absolutely no interest,” recalls Wallace, laughing. “So I sat there and watched it on my own, basking alone in my own past glories.”

Reminding Wallace that Munster haven’t won a trophy since prompts the longest pause.

“It is hard to believe,” says Wallace, “especially when you’ve been there or thereabouts for those nine seasons. At the end of your career you want to have won silverware. You don’t remember losing semi-finals with fondness, or finals.”

In the intervening nine seasons, Munster have reached 12 semi-finals, losing ten of them, and two League finals. Tellingly, they’ve won two semi-finals in Thomond Park, while losing one in Lansdowne Road and nine ‘away’, underlining why Johann van Graan stresses the importance of home advantage in the knock-out stages.

Leinster have also won 16 of the 21 meetings since, including eight of the last nine, and maximized the production line from their elite schools.

“There’s a lot of advantages in Leinster’s favour and while it’s still 15 against 15, for me the young players in Leinster seem to come into the set-up as fully formed professionals, at almost international level, whereas in Munster we seem to be still learning and developing for a couple of years.”

That said there’s a good crop emerging in Munster now, not least Gavin Coombes. “He woke up west Cork, it was a sleeping giant” quips Wallace. “A lot of those guys have come from non-traditional rugby schools and that’s spreading the net a bit wider. The young guys are now coming through almost fully formed and have stepped up to the mark this season.”

As things stand, this season’s Pro14 looks a particularly opportune chance to end the trophy drought.

The Champions Cup, as ever, looks a tougher ask. Come the first weekend in April, Munster will most likely be at home to Clermont in the round of 16 which, if they win, would probably lead to an away quarter-final a week later.

Furthermore, the Pro14 will become altogether harder from next season onwards with the advent of the four South African sides.

Wallace concurs, and adds: “While it’s not going to be won on this game, it lays the marker, that ‘now is the time and we need to grab it with both hands’.”

“Guys like Keith Earls and Conor Murray, who played in that game in 2011, don’t have silverware with Munster. Coming towards the end of their careers that could be a powerful spur too, and for Peter (O’Mahony) and CJ (Stander) and others as well.”

Wallace draws encouragement from the two recent close losses against Leinster and the quality of recent signings. “Damian de Allende has been brilliant, so calm and collected in the middle of the park.”

He also sees his old team playing with more confidence.

“You look at JJ (Hanrahan) and the way he’s been steering the ship. His kicking has been brilliant at times this season, and the way they came back to win in Clermont. On those WhatsApp groups there were guys saying it was one of Munster’s best ever wins. To turn that around should give them real confidence.”

He also credits the powers that be in Munster for acquiring what he calls “a dream coaching ticket”.

“Graham Rowntree has coached on the Lions. He’s a really good guy and players love being coached by him and Larkham’s career speaks for itself, and what he’s done and what he brings.”

Alas, of course, the absence of fans dilutes home advantage compared to that day ten seasons ago.

“When you make a bit of a break or something the crowd roar and it gives you that extra adrenalin rush. Multiply that over and over again throughout a game and of course it’s going to have an effect.”

Even so, he’s upbeat.

“You feel the components are there now for the team to take the next step and be a dominant force again. Although Leinster may have shown a few chinks lately they are an incredible team. But it’s brilliant that we have it, or any sport at the moment, particularly something as salivating as this game.”

Spoken like an absent fan, and a more optimistic ex-player.