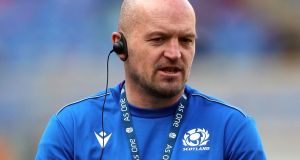 Finn Russell returns to the Scotland squad for the 2021 Six Nations tournament.

Linking up at halfback will be Racing 92’s Russell and Edinburgh’s Jaco Van de Walt, who made his Scotland debut in the ANC semi-final against Ireland. Townsend said: “As coaches we have selected a group which we believe can build on the work our players put in throughout the recent Autumn Nations Cup campaign and kick on again in terms of performance levels.

“The depth we have across the squad enables us to bring in some new players who have excelled in recent weeks and others who we believe can perform at Test level.”

The campaign begins with the Calcutta Cup clash against England on Saturday, February 6th.

Reanne Evans and Ng On-yee offered professional tour cards 18:36
Leinster and Munster homing in on French opposition in Champions Cup draw 18:11
New Champions League format could see 36 teams in group stages 16:46
Sam Bennett has to settle for fifth in second stage of Paris-Nice 16:40
Ireland to play Qatar in Hungary on March 30th 13:46
Crossword Get access to over 6,000 interactive crosswords