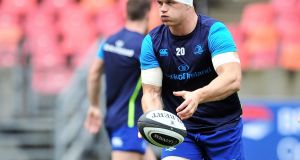 This is the first of a somewhat curious double-header, with this game preceded by the Currie Cup clash between the Free State Cheetahs and the Pumas at 5.30pm local time.

This demonstrates how difficult it is for the Cheetahs to compete on two distinct fronts, but also how the Pro14 has been prioritised by the home franchise and South Africa Rugby. It’s also, probably, a good way of promoting the Cheetahs’ Pro14 venture.

What’s more, next Saturday’s Pro14 game between the Cheetahs and the Ospreys will be followed by the Rugby Championship encounter between South Africa and Australia in the Toyota Stadium, and anyone with a ticket for the Test match will be given free access to both tonight’s double-header and the Ospreys game.

The advent of the two South African sides has clearly been a rushed and ill-prepared affair, but having granted free entry for last week’s first home game you cannot say they’re not trying.

In what appears to be a stronger selection, the Cheetahs make four changes to the starting line-up from last week’s 54-39 win over Zebre. Springbok Sevens’ star, Rosco Specman, who was an eye-catching presence in their opening defeat to Ulster, returns after injury, while Tian Meyer starts at scrumhalf after a try-scoring appearance off the bench last week.

Charles Marais returns at loose-head prop, and Springbok Oupa Mohoje has recovered from injury to make his first Pro14 start at number eight.

After the embarrassment incurred due to Isa Nacewa and Jamison Gibson-Park being refused entry to South Africa last week and thus obliged to return home before rejoining the Leinster squad this week, the two New Zealanders are promoted to the starting line-up.

Nacewa again leads the side from inside centre, with Noel Reid shifting to outside centre, while Barry Daly makes his first start of the season on the left wing. Dave Kearney moves across to the right wing.

Gibson-Park replaces Luke McGrath, who has returned home with Fergus McFadden (hamstring) due to an arm injury. Both are expected to be available for selection for next Friday’s game at home to Edinburgh.

Not so the upwardly mobile James Ryan, who has been ruled out of this game with a foot injury and is unlikely to be available for the Edinburgh clash. Irish Under-20 backrow Caelan Doris has joined the squad in Cape Town as cover.

Mick Kearney comes into the second row, while there is a new front row of Cian Healy, James Tracy and Michael Bent, all of whom were replacements in last week’s win against the Southern Kings.

Jordi Murphy and Josh van der Flier come into the back row either side of Jack Conan, with van der Flier winning his 50th cap for the province. Peter Dooley returns from injury to take his place on the bench.

The indications are that, for all the logistical difficulties they were hit with, this early stage of the season may be a preferable time in many respects to be undergoing this South African trip.

The Cheetahs have pace aplenty out wide, and have tries in them, for sure. But while they have scored 13 tries, conceding five last week to Zebre (making it 18 in three games) highlighted their defensive shortcomings, and so there may be tries in this for Leinster.