UCD top of table after five-try victory over Dublin University 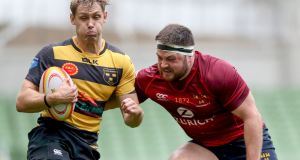 Skerries teenager Ciarán Frawley converted four of UCD’s five tries and kicked a penalty as they dished out a 36-8 derby defeat to Dublin University, moving to the top of Ulster Bank League Division 1A in the process.

UCD made light of the absence of their Ireland Sevens internationals, who were busy training for next weekend’s DHL Oktoberfest 7s in Munich, as Stephen Murphy’s intercept try cancelled out Michael Courtney’s initial score at the Belfield Bowl. Keelan McKenna, Jamie Glynn, Ronan Foley and Tim Carroll also touched down for the hosts, who welcomed back Frawley’s Ireland under-20 team-mate Tommy O’Brien as a second-half replacement.

Flanker Niall Lalor bagged a brace of tries as second-placed Terenure College claimed the scalp of defending champions Cork Constitution in a 10-try thriller at Lakelands. Nure held off a late surge to win 39-35, with the Dubliners giving a league debut to Joe Schmidt’s son Tim, the 21-year-old scrumhalf who played for the Toulouse Espoirs last season.

Secondrow Dean Moore, a recent signing from Auch and Munster hooker Mike Sherry accounted for two of Garryowen’s four tries in their 29-17 bonus-point dismissal of Buccaneers, while Lansdowne’s back three of Daniel McEvoy, Mark O’Keefe and Eamonn Mills all crossed in the second half of their 25-5 victory over Young Munster on the Aviva Stadium’s main pitch.

Meanwhile, Naas are two points clear at the top of Division 1B after running in four tries past UL Bohemians at Forenaughts. Player-coach Johne Murphy (13 points) and Fionn Higgins, who scored his third try of the campaign, steered the Kildare men to a 28-13 victory. Munster’s JJ Hanrahan started opposite Murphy as Bohs outhalf in his first game back from a shoulder injury.

Ulster’s Johnny McPhillips was back with a bang for Ballynahinch, scoring 12 points on his return from the groin injury which kept him out of the summer’s World Rugby under-20 Championship. Hinch were the only Ulster club to win in Division 1B, taking a 27-6 verdict against Old Wesley thanks to tries from McPhillips, Conor Kelly, Richard Reaney and Aaron Cairns.

Flanker Kevin Allen produced a man-of-the-match performance as Dolphin edged out Ballymena 10-6, while recently-retired Munster centre Cian Bohane weighed in with a hat-trick of tries as UCC incredibly came from 21 points down to draw 31-31 with Banbridge at Rifle Park, while 19-year-old talent Michael Lowry enjoyed a try-scoring debut.