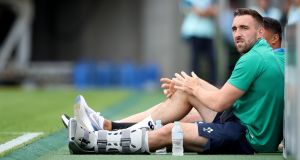 Jack Conan suffered a broken ankle in training in Japan but could be back plahing for Leinster next month. Photo: Dan Sheridan/Inpho

Jack Conan is on course to take part in Leinster’s two-game mini tour of South Africa after the Six Nations, thus in turn potentially putting him in the frame for the province’s Champions Cup quarter-final against Saracens on April 4th.

The Leinster and Irish number eight is seemingly set to return sooner than expected after suffering a badly broken ankle in training in Japan which ruled him out of the pool game against the hosts and ended his World Cup.

Stuart Lancaster, Leinster’s senior coach, has also confirmed that Dan Leavy, who is back running, is also on course to return to action before the end of the season following the horrific knee injury he sustained in last season’s Champions Cup quarter-final against Ulster.

“Jack is getting closer and closer to returning,” said Lancaster at Leinster’s UCD training base today. “Jack is closer than Dan. We’ve got a block of three games now and then we’ve got a break and then we have two games before Saracens, the Kings and Cheetahs away.

“We’re hoping Jack will be in or around that sort of time. Dan will probably be a little bit later, not far off as well, which is such an amazing turnaround for Dan in particular. To get a player back of Jack’s quality and Max (Deegan) and Caelan (Doris) making their international debuts, it is a good place to be.”

Conan will “potentially” be on the plane for those games in Bloemfontein and Port Elizabeth, while as for Leavy, the Leinster senior coach said: “He is definitely on the right track, definitely. He has had fantastic physio and medical advice and opinion. And he has followed it to the tee. My chair looks over into the gym and for, I reckon, nine or 10 months now, I’ve watched him day-in, day-out go from tiny, tiny steps in a brace to beginning to walk and move, getting his strength up. It’s phenomenal really to see him getting back to the place he is now. I think he did his first run the other day.”

While it remains a matter of conjecture as to when Leavy will return, Lancaster admitted: “I think the (Champions Cup) quarter-final would be a stretch by a big mark. But he is getting closer which is great. He did it in the Champions Cup quarter-final against Ulster. To turn it around in 12 months, or a little longer, would be amazing really.

“When you come back from long-term injuries, it is not just a case of he’s training, now let’s pick him for the biggest game of the season. They’ve got to ultimately get two-three good weeks of running, two-three good weeks of training, maybe a Pro14 game. Not only that, we’re in a position whereby if it’s not Josh Murphy or Scott Penny or Rhys Ruddock or Josh van der Flier, there’s plenty of others back rowers.”

Indeed, with that last named quartet, plus Conan, Leavy, Deegan, Doris and Will Connors, the Leinster brains trust could have some task on their hands one day selecting a starting trio from that lot.

Deegan has been released back to Leinster for Saturday’s game against the Cheetahs at the RDS (kick-off 2.30pm) from the Irish squad, along with Dave Kearney, Luke McGrath, Connors and Ronan Kelleher.

By contrast, Doris has been retained, strongly suggesting that he will be in the Irish 23 for the game against England at Twickenham on Sunday week, while Kelleher most probably will be as well. But having had been restricted to barely 20 minutes of rugby since Leinster’s win away to Northampton, the hooker is in need of game time before, presumably, returning to the Irish squad next week.