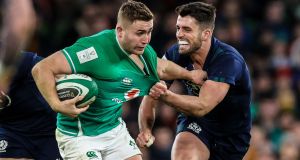 Jordan Larmour tries to hold off the challenge from Scotland’s Adam Hastings at the Aviva Stadium. Photograph: Billy Stickland/Inpho

You have may seen the footage. Shane Williams in a Guinness Six Nations tribute and the irresistible hook of “87 caps 58 tries they told him he was too small for rugby”.

Quite the tear jerker, it was a lament the Welsh winger ignored. At 60kg, boxer Katie Taylor’s precise fighting weight, Williams relied on his speed and his wits in equal measure. Everyone wanted to rag doll him. But few ever did.

Jordan Larmour is a bigger player than Williams by 30 kg and taller too. But by rugby standards Larmour is not huge.

He was the smallest on the Irish team last weekend against Scotland until scrumhalf John Cooney replaced Conor Murray for the last 20 minutes. But, like Williams, the Irish fullback is impossible to ignore. The two have similarities that are difficult to look beyond.

“I don’t think he needs my advice. I’m a big fan. I enjoy watching him play,” says Williams, who had to think hard about his rugby game and where he could best achieve gains.

“I used to play my best rugby when I was relaxed, comfortable and confident and I think he does the same as well. He enjoys taking defenders on. He’s very difficult to mark because he pops up in positions where a full-back or a winger shouldn’t. Very unorthodox. That for a defensive line, which is very well organised, is a nightmare. Perhaps that’s where I used to get my gains.”

Larmour’s father, Ian, was no slouch himself. But as a motorbike racer he had the high-twitch fibres and the passion for living on the edge. He twice raced against the peerless Joey Dunlop in Mondello Park, in itself a benchmark.

But his son’s speed is unpredictable and rarely choreographed. Like Williams Larmour plays what he sees in front of him. The creative part from the team is to put him in space and from there the opposition are more reactive than predictive.

“Half the time I didn’t know what I was doing,” says Williams. “So how are the opposition going to know. Jordan’s one of those players. Keep doing that. Rugby can a bit too structured at times and we need the likes of Jordan to do things differently. He’s got great feet, both feet, enjoys taking defenders on.

“He takes two defenders out of the game every time he gets the ball, which means that guys on the outside must be clapping their hands. Long may it continue.”

Similar to Williams, Larmour’s threat is not a straight line speed but a change of direction and a low centre of gravity to keep him balanced. While Williams warns that Larmour will occasionally make a mistake, the errors are part of the price the team plays and they should be built into his thinking.

“Enjoy it because there will be days when it doesn’t go your way,” says Williams as Larmour prepares this week to meet last year’s champions.

“You might make a mistake and they score on the other side of the field. But don’t change anything in the way he plays at the moment because he’s doing the business and I’m sure we will see mistakes. I dread to think how many mistakes [I made] over the years . . .I did a few good things but I made mistakes as well.”

Larmour has played 22 times for Ireland and scored six tries. In nine of those matches he started and in 13 came on as a replacement. But his Six Nations career as first-pick fullback under Andy Farrell has just begun.

Wales ‘nilled’ Italy (42-0) last week in the opening match, which is good by any standards. But new head coach Wayne Pivac also played George North in the centre in the hope of bringing him into the game more often as he struggles to make impact from the wing.  It’s not easy what Larmour does.

“Keep playing with that attitude and he’s only going to get better,” says Williams. “I enjoy watching Jordan and the likes of Cheslin Kolbe, Matsushima, Fukuoka in the World Cup. They were a breath of fresh air as far as I’m concerned.”

Big comparisons, something the man too small for rugby should know all about.