Andy Farrell is facing an impatient mood for proof of change 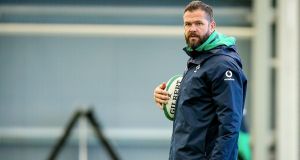 Andy Farrell: the new Ireland head coach hasn’t been given the latitude and sense of slate-wiped-clean that usually comes with that appointment. Photograph: Tommy Dickson

Does Andy Farrell have the loneliest job in Ireland just now?

You don’t have to work for Met Éireann to detect that a cold breeze has been blowing through Irish rugby for quite some time, a breeze strewn with stray cherry blossoms carried over from Japan and containing debris from what the pundits like to refer to as the “fallout” from Ireland’s ignominious exit from that World Cup.

The breeze is carrying, too, the dark whisperings from players former and current that maybe life under the old regime hadn’t always been a barrel of laughs just because the team was winning.

Ireland beat Scotland last weekend but afterwards, you had to strain hard to hear the cheering. The sight of Johnny Sexton reliably landing place kicks from all angles just doesn’t thrill the Irish rugby soul as it once did.

The squadron of former rugby players and coaches who now work as pundits suddenly sound like Moody’s analysts handing out credit ratings during the grim times. At least one of those has wondered aloud if Ireland had given the coaching job to the wrong English man. Farrell must be thanking his lucky stars that Ireland didn’t actually lose the game.

The decision by Joe Schmidt to announce in November 2018 that he would be stepping down after the World Cup was probably unavoidable and raised questions as to how the players would respond to that: as to whether the regime would lose its tautness and momentum.

Even if Schmidt’s final year had been a thundering success – even if Ireland had exceeded the wildest predictions and become world champions – the nature of the succession was still going to leave Farrell in a tough position.

He had become an indelible part of the Schmidt backroom staff. In Japan, as things went from bad to worse, he was a regular fixture at Irish press conferences during the bombardment of media events that all teams are obliged to hold.

So even though the Schmidt era ended with the release of his biography and a farewell appearance on the Late Late Show, the incoming coach stands as a constant reminder of both the high points and the ultimate disappointment of that regime.

Ireland Rugby Inc was forced to lick its wounds in the week after South Africa thwarted England to lift the Webb Ellis trophy and thus allow the majority of Japanese citizens to stop waving and smiling and get back to watching baseball and working too much.

Suddenly, everything about the state of Irish rugby was up for grabs and scrutiny: the private-school system, the folksy marketing campaign which portrayed the team as the national darlings and the pattern of chronic underachievement by Irish teams at every World Cup since 1987.

All of the joy of the previous four years – the Six Nations titles in 2014 and 2015, the Grand Slam in 2018, the wins in Chicago and Dublin over the All-Blacks – were quickly forgotten. The verdict was cold. Ireland had failed in their ultimate test.

As it is, perhaps because of the World Cup, it has been harder for the Six Nations to impress this year. The old competition was always one of the consolations of winter, guaranteeing bumper crowds in the stadiums and in the pubs and, if nothing else, serving as a good excuse to throw a log on the fire and turn your back on a wild afternoon.

It has always been a slickly marketed competition, with the ad folks capitalising on the century’s worth of tradition and rivalries: set a few frames of slow-motioned Gareth Edwards or Patrice Lagisquet in full poetic flight to some evocative string music, contrast that with close-ups of Wade Dooley causing mayhem in the lineout or Brian Moore glaring blue murder and even brand new viewers of the sport are clear that this is a competition with a past and a heritage and that it has substance.

Which is, of course, a fancy way of saying that it’s the same old crap, year after year. The same story lines. Le Crunch! What is wrong with the Scots! Will plucky Italy get a win! But which France will turn up!

One of the inadvertent triumphs of the World Cup was that it illustrated the narrowness of rugby’s international competition. It wasn’t just that Japan managed to beat Ireland, to beat Scotland, and to compete with South Africa. It was that the colours of their shirts were so novel. It was that they played the game with such openness. It was quite simply that they were something different.

Now, the Six Nations seems very provincial all of a sudden.

The visit of Wales this weekend doesn’t feel the same because there is no Warren Gatland causing mischief any more. And anyhow, the Welsh are recovering from the opposite World Cup experience to Ireland’s in that their team and supporters are still kicking themselves that they didn’t reach the final and have spent the depths of winters in the valleys mulling over the truth that they never have a better chance to win the thing.

Here in Ireland, the public is impatiently waiting for visual evidence that this is a new era for Irish rugby rather than a continuation of the Schmidt way.

Already, Andy Farrell finds himself under an intense spotlight over his selection of scrumhalf, with a growing chorus of insistence that it is high time to move on from the venerable Conor Murray.

The underlying question to all of the commentary and speculation and gloomy forecasts concerns where Irish rugby goes from here. England, with its population and money, will be a perpetual rugby force.

There are clear signs that France may have awoken from their decade-long funk and may be in the mood to win their first Six Nations since 2010. Neither of the big beasts of the old tournament will need a second invitation to cut Ireland down to size in the coming years.

So Andy Farrell is in a tough position. He is a new head coach but he hasn’t been given the latitude and sense of slate-wiped-clean that usually comes with that. There has been no honeymoon period. There is an impatient mood for proof of change, if only for the sake of change. Everything is being judged against last year’s failures and forms and methodology. It doesn’t feel entirely fair: as though the jury has made its mind up before the case has even been heard.

But then Farrell, one of the true survivors of professional sports, knows that fairness rarely comes into it. Sometimes being in the right place at the right time is the most important thing.

If Farrell is to turn this dubious inheritance into something special, then he’ll have done it in front of a sceptical audience.