Quote of the week, number and what about the exiled Brennans and Oliver Jager 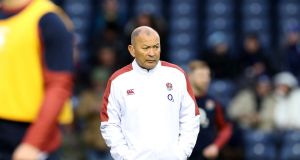 Some enjoyable individual skirmishes over the weekend: Ronan O’Gara versus Matt Williams on Virgin Media briefly boiled over, while on the BBC Sonja McLaughlin’s interview with Eddie Jones was a journalistic version of ‘Check, Mate.’

We’ll start with the man in possession of 1,083 international points interrupting Williams’ speech about the state of Andy Farrell’s Ireland.

“What we’ve seen the last 12 months was rubbish,” Williams noted after Ireland’s victory over Wales before adding that Saturday’s performance was “the minimum standard that’s acceptable.”

O’Gara: “I can certainly tell you that’s not the minimum. That’s a bonus point win at home against Wales. I don’t think you have any idea how difficult that is ... I wouldn’t say that’s the minimum standard. That’s exceptional.”

Shane Horgan leaned towards his former teammate over former coach.

On the Beeb Sonja McLaughlin brilliantly performed the primary duty of an interviewer; ask a straight and relevant question about the England coach’s propensity to antagonise the opposition pre-match, and hold firm until an answer comes.

When Jones refused to regret saying England would inflict “absolute brutality” on France, McLaughlin asked: “Why do you say the things that you say?”

“You do,” she insisted, “you don’t do anything without knowing why you do it.”

Silence. Eddie knew he was cornered.

He scrambled for safety with the widest grin imaginable but McLaughlin had him on the hook. “You’re a bright man ... I am just intrigued why you do it?”

The 2018 Grand Slam was a lucky campaign for Ireland. The squad went injury-free, besides losing a midfielder per match while squeezing out victories. Sounds a little like 2020, so far, as Robbie Henshaw’s head injury puts him alongside Garry Ringrose (thumb) and Will Addison (calf).

Also, twice in two matches an opponent, Hadleigh Parkes following Stuart Hogg, has fumbled the ball over the try line. Wales kept hammering away but the crucial moment came on 60 minutes when the calm demeanour of the Ireland captain perhaps influenced Romain Poite’s next decision.

“Player did not support their body weight,” Poite explained after incorrectly penalising CJ Stander for a turnover technique that should be coached in schools and clubs.

“Fair enough,” Sexton replied. “Can I say one thing? If they are coming in off their feed, to seal [the ball], are we allowed come poach over the top?”

Maybe Poite realised the error because from the next scrum he awarded Ireland a penalty that produced celebrations – on the field and in the coaching box - similar to winning the championship.

“It’s a big moment, seven point swing” said Tadhg Furlong. “It means a lot to us to defend our own line especially at home here.”

Off the subsequent lineout maul, the ball went into midfield where Keith Earls’ stunning pass ended up with Sexton hurting himself tackling Parkes 80 metres down field.

Anyone need a tighthead prop? How about a six foot six inch French lock who sounds like a Clohessy?

After losing All Black Owen Franks to Wasps this season, the Canterbury Crusaders promoted former Blackrock College prop Oliver Jager. The 24-year-old won a Leinster senior cup medal in 2013 alongside Garry Ringrose, beating a St Michael’s side that included James Ryan and Max Deegan in the final, before heading to New Zealand for a year when overlooked for an academy contract. He has yet to return. So far this season Jager is a regular starter in Super Rugby but closer to home, the massive frame of Montpellier’s Daniel Brennan has been largely hidden from view since rejecting a move to Munster in 2018. Josh Brennan – the younger son of Trevor – who joined Toulouse in 2002 and never came back has followed his brother into the France under-20s squad this season.

“He’s a carbon copy of me, but better,” said Trevor of Josh last year.

“You’d swear Daniel had been dragged out of the Liberties with his Dublin accent. [Josh] picked up a Limerick accent [from summer holidays on the Clohessy farm]. It’s nuts.”

With all the Irish provinces increasingly reliant on supplies coming from the Leinster schools system, presumably efforts could be increased to entice the Brennan brothers and Jager into the fold.

2: Opportunistic tries by Ireland’s teenager winger Beibhinn Parsons in as many games.

1 Matt Williams: The economic earthquake for European rugby is coming
2 Cheltenham faces criticism after racegoers suffer Covid-19 symptoms
3 Premier League 2019/20: End of season (for now) report card
4 Pat Critchley: ‘You teach or coach the person first and the subject or the game second’
5 Ian O’Riordan: Learning to run for the first time all over again
Real news has value SUBSCRIBE

Matt Williams: The economic earthquake for European rugby is coming 07:00
Sporting Poetry: Seeing far beyond the scoreboard 06:00
Pat Critchley: ‘You teach or coach the person first and the subject or the game second’ 06:00
Premier League 2019/20: End of season (for now) report card 06:00
Ian O’Riordan: Learning to run for the first time all over again 19:24
Here is your handy guide to sport on television this week