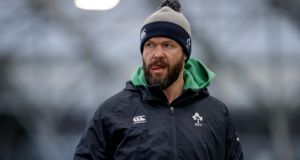 Ireland head coach Andy Farrell: ‘We’re in a good place, we’re brimming, ready for what we know is going to be a really, really tough game’ Photograph: Dan Sheridan/Inpho

True, Wayne Pivac will announce his Welsh side on Thursday from a position of relative strength and good health, ready for another hugely significant Celtic derby against Ireland at the Aviva Stadium on Saturday (kick-off 2.45).

But whatever the Irish team will have learned from Wales’s opening 42-0 win over Italy, Andy Farrell and his squad had plenty to analyse from their sleeves-rolled-up 19-12 victory against Scotland. Farrell then announced a side to face Wales along anticipated lines.

The prevailing talk of change in the political and rugby air this week probably means this selection won’t have blown supporters away. (As an aside, due to the circumstances those picked won’t be able to exercise their democratic right on Saturday!)

Peter O’Mahony and Robbie Henshaw are recalled to the starting XV from the bench in an otherwise unchanged team. That said, in the absence of Caelan Doris and Garry Ringrose, there weren’t too many compelling reasons for further change. Will Addison, it transpires, is still hors de combat with a calf injury. The fit-again Keith Earls returns to the squad, but with Andrew Conway earning his retention, does so on the bench. Similarly the performances of O’Mahony and CJ Stander made it hard not to retain them, besides which the uncapped Max Deegan is sure to add his attacking edge off the bench.

Despite his late calf injury against Scotland, Tadgh Furlong has resumed training, while Jack McGrath is on standby for David Kilcoyne pending him completing the return to play protocols.

Conor Murray revealed on Monday that the review of the Scottish game at their purpose-built National Indoor Arena in the Sports Campus Ireland complex had been different.

This went further than the purpose-built facilities, which allows the squad to conduct the review on-field, for Farrell is also striving to give the players more hands-on involvement in the review.

“We’re trying to make it inclusive, get some proper feedback, get them talking, they’re the guys out there on the field, they know exactly the feeling of what went on,” said Farrell yesterday.

“We’re watching from the stand or on the video. We’ve got a good idea, can we marry that up together? It was a great morning on Monday morning. The facility enables us to do things a little bit differently, which is quite nice. Our guys are rugby players, they don’t just want to be sat in a classroom the whole time. They want to be fixing things out on the pitch and the facility helps us do that.”

One of the primary concerns was the frequency with which the Scots gained access into the Irish 22 – ten times in all – if for a return of just six points.

“There was a mixed bag of the reasons why they got into our 22, whether it be from execution or a poor decision or a penalty – going off our feet, I remember that – or a couple of poor kicks allowed them in there even at the start of the game.”

“They flowed into our 22 and camped down there for quite some time,” said Farrell, who admitted that as a defence coach he always found Scotland “unbelievably hard to defend against.”

However, he conceded Ireland needed to be better against Wales in a number of areas.

Ireland did not reproduce the line speed which negated Finn Russell in the World Cup win in Yokohama, but Farrell countered: “If they get quick ball you can’t have line speed.”

“First and foremost you have to win your collisions and that’s what happens in top-level rugby across the world. That’s got to be the Holy Grail really.”

“Defensively we were really good at times but not consistently. We felt we gave them yards at times. We lost a few collisions at the start of the match. We can be better there.”

“Our set-piece? We had an honest and open forum there,” said Farrell, with both the two scrum penalties conceded and the manner in which the Scottish pack stunted Ireland’s normally potent maul.

As for Ireland’s attack, Farrell admitted Ireland became “a bit clunky at times” as Scotland “really messed up our ball and everyone wants to play off a quick ball. At times in attack, I thought we created some really good opportunities. Did we see them all? Probably not all of them so there’s some real good opportunities that went wasted there.”

He also didn’t agree with Brian O’Driscoll’s claim that the pack lacked “dog”.

“There was plenty said about CJ Stander as well last week and he gave a man of the match performance. There’s plenty of dog in them. He was part of that team that there was no dog in. I saw some good reactions from people. Sometimes they were rightly a bit upset with losing a few collisions, then we saw a reaction.”

Farrell maintained that confidence in the group was good and that their egos have not been bruised.

“They can’t wait to get back onto the field. Training today was quick, it was intense, it was ferocious. We had a few things to fix as well and we’ll make sure we do that on Thursday. We’re in a good place, we’re brimming, ready for what we know is going to be a really, really tough game. We know that Wales are Grand Slam champions and semi-finalists at the World Cup. Rightly so, they’re being talked up a great team. We know what’s coming this week, we get excited by that as well.”