Johnny Sexton puts his body on the line in exceptional show 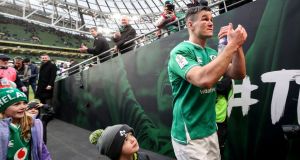 Johnny Sexton and his son Luca leave the pitch after the game. Photograph: Dan Sheridan/Inpho

Captaincy is a heavy assignment. The sight of Peter O’Mahony introducing Irish players to President Michael D Higgins sent a fissure of concern around an already suspicious Aviva stadium on Saturday.

Johnny Sexton injured before kick-off? Turns out he “stupidly” got an oily rub after his right leg was strapped in the latest example of an outhalf impersonating a forward.

There followed the usual points gathering, bone bruising performance we have come to expect of this Irish leader.

The minimal standard or exceptional? Make up your own mind.

Victory over Wales was only cemented in those tetchy moments after Josh van der Flier’s try and Sexton cut over the sideline conversion to make it 19-7.

The defending champions, these Grand Slammers, pounded into Ireland’s 22. In response Sexton did his first impression of Brian O’Driscoll, with resistance reminiscent of the 2009 victory over England. He kept beating backrowers and centres in ferocious contact. Kept dragging others into the fray.

It was a follow the leader performance only shy of his 2011 European Cup final second half in Cardiff.

Others must lead when Sexton is sucking oxygen. Tadhg Furlong filled the media with hope. Just the calm acceptance of his new role.

“We gonna have to be better going to Twickenham,” Furlong smiled on Virgin Media. “It’s a hard place to play rugby.”

When a Triple Crown was dangled under Iain Henderson’s nose he locked eyes and remembered last August’s humiliation.

“All the players will be thinking was that last game in Twickenham and how that definitely didn’t go the way we wanted it to go,” said the Ulster captain. “Form is one of those elusive things in sport no one can really explain but when you get it right it feels great.”

Henderson recently spoke about positive changes in the Ireland camp, perhaps inadvertently shining a light on what went wrong in 2019, but Sexton shut that narrative down: “We are trying to draw a line under last year and even 2018. We are trying to build, develop something new. In saying that, I think some of the messages that came out of our camp haven’t been taken the way they should be. We have taken a lot of what Joe’s done in the last few years and built on it, added bits to it. To suggest we have thrown away everything is just wrong.”

The Ireland outhalf underwent a head injury assessment and, according to the IRFU “he will complete his process over the [next] 72-hour period” following a wincing tackle on Hadleigh Parkes during his all-consuming 70-minute display.

“He is in control, isn’t he?” said Andy Farrell. “That’s what he has done all his life. That’s what he does best and with the added responsibility of captaincy I think he has added to his game.

“The last two performances have been nothing short of sensational.”

When Furlong screamed “No!” three times in reaction to referee Romain Poite awarding Wales an early scrum penalty, Sexton began to dictate the rules of communication.

“Tadhg was frustrated with the scrum we had five metres out,” said Sexton. “Our ball, we’d have no reason to turn it like that.”

Social media, even thousands of Irish supporters, only saw a man with a reputation for losing his cool. Such optics were deceiving.

“I was just asking the questions. In fairness to Romain he was brilliant. We had good conversations.”

Sexton spoke last week about avoiding the French ref’s notoriously cranky side. Paul O’Connell was sin-binned, on a dark Limerick night many moons ago, not for what he said but how he said it.

After Jordan Larmour’s slippery try Sexton produced his now ceremonial error by scuffing the conversion. When the Welsh responded with a slick try courtesy of Alun Wyn Jones’s perfect offload, he spoiled Dan Biggar’s conversion routine so the officials would further examine the build-up.

Sexton’s reputation precedes him. He knows this. He knows the captaincy didn’t come his way until age 34 because of previous interactions with ref and foe. That was not the case on Saturday.

“I was just making sure you checked the other [pass],” he told Poite while lining up the conversion of Furlong’s surging try. “Here,” he smiled, passing the official some water.

If Sexton has a habit of riling opposition supporters, neutrals and even some of his own, he certainly enrages direct opponents as he did by noting their toes were not behind try line. Van der Flier squeezed over from the subsequent maul on 46 minutes but extra red jerseys sprinted out to block down the conversion.

With 50 minutes clocked the cautious coach would be forgiven for counting the seconds until Ross Byrne could close out victory. Twickenham is a fortnight away and Sexton has a dodgy knee.

He played the next 20 minutes with total abandon, flinging himself into collisions to dampen Welsh flames. He can’t help himself, even if such bravery could eventually exact a permanent toll.

To prevail, Ireland needed their leader to have utter disregard for his own safety, because that’s how these Six Nations wars are always won. By 57 minutes there was a shiner under his right eye and he was increasingly slower to rise from the turf.

Wales were camped in the Ireland 22 now. When CJ Stander repeated last week’s heroic turnover against Scotland only to be penalised for not supporting his body weight, Sexton calmly spoke to Poite: “Can I say one thing? If they come in and seal can we poach over the top?”

“I will have a look,” Poite replied.

Any good captain plants a seed in the referee’s mind.

On 64 minutes the inevitable happened. Coming second in a foot rush behind Jacob Stockdale, he struggled to find his feet following rough contact with Parkes. Keith Earls dragged him up. He kept going. Kept drilling rucks. Kept putting a body not built to move hookers and flankers in harm’s way. Finally, on 70 minutes with 12 points to spare, Farrell was ready to trust Byrne.