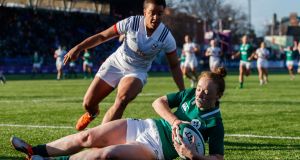 Ireland’s Laura Sheehan scores a try during the women’s Test match against the USA at Donnybrook. Photograph: Tommy Dickson/Inpho

Ireland fell to a disappointing defeat at the hands of the USA in a fiercely-contested women’s Test at Donnybrook on Sunday afternoon.

Despite securing tries in each half through wingers Laura Sheehan – on her debut – and Eimear Considine, the hosts couldn’t halt the charge of the American side.

During a positive opening to the contest, loosehead Lindsay Peat created momentum for Ireland with a powerful attacking carry. The opposition defence held firm under this early pressure, with Jennine Duncan eventually breaking forward into the Irish half.

This was the catalyst for their opening try of the game, which arrived in the 13th minute. Following a ‘tap and go’ by scrumhalf Carly Waters, skipper Kate Zackary offloaded to Kimber Rozier for a clinical finish at the right of the posts.

The Boston centre was on hand to convert her own five-pointer, creating further daylight between the teams. Ireland struggled to develop sustained pressure on their home patch and suffered a further set-back when Ciara Cooney was forced off through injury on 32 minutes.

Her place in the secondrow was taken by Offaly’s Nichola Fryday, who couldn’t prevent fullback Kaitlyn Broughton from securing the USA’s second try of the contest. It had been a difficult opening period for Ireland, but Sheehan ensured they at least finished it on a high. After Michelle Claffey picked her out in space on the left flank, the UL Bohemian winger utilised her explosive pace to claim a much-desired score.

Ireland’s deficit was reduced to seven points (12-5) as a result, but it was USA who controlled possession on the resumption.

Their patience was subsequently rewarded on the hour mark, when the impressive Meza Bizer applied the finishing touches to an extended move. This was supplemented by Rozier’s superb touchline strike, leaving Ireland to contend with a 14-point deficit.

In an effort to rein in the challenge of Rob Cain’s charges, Ireland unloaded their replacements bench during the final quarter. Ballinasloe teenager Beibhinn Parsons was among those to be introduced and she became Ireland’s youngest senior women’s international – at 16 years and 353 days – in the process.

She was eager to make an impact on the proceedings and was just short of the line on 79 minutes. The visitors’ resistance was finally broken by Considine on the stroke of fulltime, though this try wasn’t enough to prevent a third consecutive loss for an underwhelming Ireland, who travel to Twickenham to take on England next Saturday.