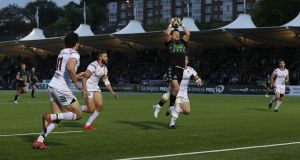 Pete Horne of Glasgow Warriors catches a kick to run through and score his team’s sixth try during the Guinness Pro 14 semi-final against Ulster at Scotstoun Stadium. Photograph: Ian MacNicol/Getty Images 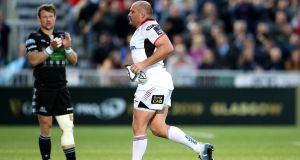 Hopes of an all-Irish Guinness Pro14 final next weekend final were cruelly crushed on Friday night at Scotstoun where a rampant Glasgow Warriors side ran riot against Ulster to secure a comprehensive victory at a place in next Saturday’s decider in Celtic Park.

Playing with verve and vivacity, pace and panache, Warriors scored seven tries in a performance that emphasised how dangerous they are if given free rein. But it was not just Glasgow’s dynamic attacking game that proved so devastating; their defensive work was equally effective, snuffing out incipient Ulster snipes with considerable ease.

Ulster will reflect on this match as one in which they simply did not compete at the right levels. Their forward effort, save for some good work by Iain Henderson and Marcell Coetzee, was feeble, while behind the scrum the brilliance of the likes of Jacob Stockdale was not seen.

Glasgow could not have wished for a better start, with a try by winger Tommy Seymour and the conversion by Adam Hastings. It was sparked by a break virtually from the kick-off by Kyle Steyn and then patience through some twenty phases before Hastings, showing a great deal of vision, threw a long pass to Seymour.

Ulster then put themselves under further pressure when they lost a lineout in their own 22 allowing Glasgow to launch another series of attacks and only a perceptive interception by Louis Ludik prevented a second try.

The home side, however, did not have long to wait before making their second successful strike. This time it came from a driven line-out, and then a blindside dart to the line by Ali Price, Hastings again adding the conversion points.

Ulster finally got themselves into the game with a penalty kick to the Glasgow 22m area that triggered a sequence of close range surges ending with a second penalty award and another kick to the corner. But this time Ulster made a shocking mess of the line-out giving Glasgow a get-out-of-jail card at a bargain price.

Glasgow quickly profited from the resultant territorial gain after Ulster were penalised at a scrum leaving Hastings to add to his points tally with a third goal from three attempts.

From the restart Glasgow’s Rob Harley was penalised for obstruction allowing John Cooney to open the Ulster account but minutes later when Warriors won a penalty under the posts, the home side opted for a scrum. The decision proved to be the correct one for Glasgow after Steyn, Jonny Gray and Scott Cummings softened up the Ulster defence before Rob Harley dived over for his side’s third try, again the boot of Hastings providing the extras for a 24-3 interval lead.

Ulster looked more urgent at the start of the second half but were denied a potential score when Ludik was pulled back for a forward pass with undefended space in front of him.

The Ludik break seemed to give Ulster a new confidence that translated into intense pressure on Glasgow in the red zone and ultimately a penalty award. Ulster, as Glasgow had done in the first half, eschewed the kick at goal and instead asked for a scrum. But a desperate tackle by Steyn prevented an Ulster score.

The defensive contribution by Steyn proved critical, in revitalising the Warriors, who hit back with a second try by Seymour from slick handling by Sam Johnson and Stuart Hogg.

Then when Hastings chipped over the Ulster defence Glasgow profited again as Steyn and replacement Ryan Wilson exchanged passes for Steyn to gallop over for a deserved try, Hastings once more successful with the conversion kick.

Broken they may have been but Ulster still had fight left in them as they showed from a driven lineout that ended with Coetzee crashing over in the corner for an unconverted try.

Skipper Rory Best was substituted a minute after, applauded off by both sets of players as he brought down the curtain on his storied Ulster career.

Glasgow quickly reasserted themselves with a try from Pete Horne from a delicate chip kick over the line by his brother George. With the game well and truly out of sight Ulster managed to give their fans some cheer with late tries by Rob Herring off a lineout drive and Michael Lowry from a charge by Sean Reidy.

In between these two Ulster scores Glasgow ran in their seventh try by George Horne, Hastings converting to complete an impressive performance off the tee.