Leinster vs Munster: When two tribes go to war 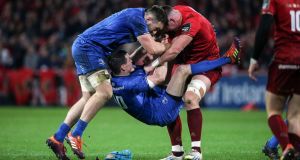 Dropping Jannie Stander into the Laighin Pit might spark some security issues at the RDS. Derbies do spike a father’s testosterone levels.

“I can go back to my school days when a few dads were ripping each other around the stand,” remembers the boy who dreamed of becoming a Springbok until the man went another way. “I’m not going to talk about that because my dad was in the charge.

“I remember one game he had just come back from a hunting trip when I was in Oakdale playing against Outeniqua. Their winger stepped so far out he was running next to the stand, about 10 metres out. And my dad walked down and almost ripped the touch judge out by his collar and took him back to the farm. Mum stopped him.”

CJ Stander laughs. Because it was a joke.

Leinster versus Munster has the capacity to make men commit acts of violence.

Or Alan Quinlan. The Tipperary flanker would be a Lion forever only he gouged Leo Cullen at Croke Park. A few months later John Hayes saw red (so did Cian Healy after an unwanted stud to his eyebrow). Then, in April 2013, doubt was cast across the incoming national captain-coach partnership (Joe Schmidt’s anger at Paul O’Connell not being cited for “fly-hacking” the ball but catching Dave Kearney’s head eventually subsided).

That’s before we mention the bitter line of succession from Ronan O’Gara to Johnny Sexton, rudely interrupted by an Argentinian, and now Sexton to Joey Carbery.

“Leinster vs Munster is about families,” said Felipe Contepomi, the good doctor having added more spice to this pot than anyone. “Some Munster people had to come live in Dublin so their kids were raised in Dublin, so they are from Leinster.

“You have families that are not divided but people inside their families are from Leinster and Munster. So it is very special.

Like the Cronins, Seán and Neil, split between tribes. Or Sexton’s bloodline to Kerry. Or Andrew Conway’s Munster link through his uncle Mark McDermott playing hooker for them despite both being educated in Blackrock.

“Exactly. That’s what makes it special. It’s not only about a town – like Toulon or Bath – or where you live or where you have grown up but where your family puts you or where you are now.”

It’s about Carbery – half Kiwi, half Lilywhite – carving a red legacy because the blue road was clogged.

Now that trade route is wide open there will always be new stories. But the previous semi-finals, with that famous face scream, the odd stamp, gouge and kick running through the veins of Leinster v Munster makes this afternoon’s entertainment so enthralling. Also, the game provides thrilling snapshots of Irish rugby’s evolution. O’Gara handing off Mal O’Kelly in 2006. The Brian O’Driscoll intercept in 2009.

In the present tense it feels like a trial to finalise Ireland’s backrow. Who is the best number eight? If the answer is Jack Conan maybe Stander shifts to blindside, where he impressed at the tail end of Jamie Heaslip’s residency, and does that mean Peter O’Mahony must be accommodated on the openside? This was briefly examined on the 2018 tour of Australia until O’Mahony crashed to earth after an aerial duel with Israel Folau. O’Mahony remoulded as a seven covers the loss of Dan Leavy on the premise Seán O’Brien or Josh van der Flier cannot reach the standard.

Now, say that to either man’s face.

There is real value in this semi-final. But World Cup issues are not muscling in on a Leinster/Munster feud. No way.

Stander compares the impending ferocity to his nose busting introduction to South Africa’s premier rivalry, the Blue Bulls against Western Province in 2011 while Contepomi is reminded of the Buenos Aires Superclásico between River Plate and Boca Juniors.

Stander and Contepomi understand the significance of this game better than the natives because they have existed inside and outside the ecosystem.

“Derbies – Bulls v Stormers – I’ve been involved in that,” Stander remembered. “It is a big game. I wouldn’t say I was a man before that game. Men going against each other. This [Leinster v Munster] is bigger than that.”

Johann van Graan witnessed Stander’s painful exposure to fully formed Afrikaners. Munster’s head coach is only 39 but he was a technical adviser for the Blue Bulls since 2007.

“I remember CJ was the new kid on the block. The Blues Bulls played Western Province in a three o’clock game at Loftus. On those days the assistant coaches could still roam the touchlines. I was on the far side as two of the loose forwards for Stormers were Francois Louw and Duane Vermeulen.”

Springboks. Men. Louw gave both van der Flier and Leavy a roasting over the ball at The Rec earlier this season while Vermeulen is the only other player capable of replicating the try Billy Vunipola scored in Newcastle.

“They welcomed CJ to Loftus, to Currie Cup rugby,” van Graan continued. “I remember getting to him and he had blood all over his face. That’s the beauty of sport. It’s the rivalries, the derbies and respecting each other. We can laugh about it now. Sometimes we lose the beauty of sport.

“I just got a chance to have a long chat with Felipe, to chat about life, he’s a fantastic guy,” he said before the Pro14 awards “and we all just want the same thing: to represent something better than ourselves.”

That’s lovely, but did CJ play on?

“No, he went off with those things in his nose.”

Stander: “It was the first time I broke my nose. They broke my nose the two of them and then pulled me up and still they shook my hand as I ran off. I remember my dad and family were there. First time playing Currie Cup. Lasted 20 minutes.”

Broke your nose and became a man?

“Ya. You have to break your nose sometimes. To test yourself.”

We are all mates, we all train together in the Irish set up, but when you step on that pitch it is Munster against Leinster

Dropping Contepomi into Thomond Park sparked plenty of security issues. The how or why no longer matter, Contepomi always went straight for O’Gara. Denis Leamy was never going to allow that. It spilled into the 2007 World Cup disaster at Parc des Princes which only heaped more misery on Leinster players in green jerseys as the Argentinian cupped his ear after each score.

The outhalf feud seemed destined to subside when Contepomi limped out of the 2009 semi-final. Of course Sexton ruined any hope of peace in our time.

In December, the 33-year-old slammed Carbery into the grass for inspecting a kerfuffle (all happening in between Ireland camps). Unfortunately, Carbery’s response was out of Frank Murphy’s ref microphone range but heretofore he has produced a soaring impression of Sexton in 2009.

The outhalf pecking order debate can still be reignited. This open wound can become as infected as the O’Gara-Contepomi, O’Gara-Sexton scabs.

“Leinster vs Munster has got a lot of history,” said Contepomi. “It reminds me of Argentina where you have River and Boca. Inside the families, some are from one club, some the other and you have this very healthy rivalry that you want to beat each other, win the game, but it’s still your brother.”

Who do you support?

Munster are counting 10 years in Leinster’s rear-view mirror. They beat them in Thomond Park last December, fair and square except for James Lowe’s dismissal and Cullen removing Sexton on the hour mark with the game far from decided. Keith Earls duly intercepted Ciarán Frawley’s pass deep in Munster’s 22 with eight minutes remaining and the score 19-10.

That was a phoney war, even if there were enough incidents to fill this page.

“I enjoyed what was going on,” said Stander. “I got stuck in. It’s good to test the strength of the jersey collars, see how far you can stretch them.

“We are all mates, we all train together in the Irish set up, but when you step on that pitch it is Munster against Leinster.”

“It was a kick so I had no other alternative but to put him off,” referee Nigel Whitehouse told the captains, Mick Galwey and Reggie Corrigan, as Eric Miller walked while Anthony Foley received treatment to his crown jewels. Fourteen-man Leinster recovered to win their first major trophy.

John Hayes got a red card and six-week suspension for stamping on Cian Healy’s face as punishment for the young loosehead pulling down the Munster maul. Healy rose splattered in blood. The touch judge saw it. So did the TV cameras.

Incoming Ireland and outgoing Leinster coach Joe Schmidt heavily criticised TMO Eddie Walsh’s decision not to cite O’Connell after the Munster captain caught Dave Kearney’s head with his boot. After Kearney was hospitalised Schmidt said: “You cannot fly-hack near someone’s head like that.”