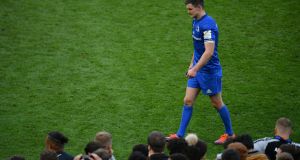 Johnny Sexton won’t be in the Leinster team for the Pro14 semi-final meeting with Munster. Photograph: Dan Mullan/Getty Images

Leo Cullen has explained that the decision to start Ross Byrne ahead of Leinster’s captain and all-time record points scorer Johnny Sexton as one of four changes to the starting XV for Saturday’s Guinness Pro 14 semi-final against Munster was in order to freshen up the team.

The Leinster head coach made the same alteration at outhalf following their Heineken Champions Cup final win over Racing in Bilbao a year ago for a Pro 14 semi-final against the same opponents at the RDS when promoting Ross Byrne as one of six changes. But unlike then, when Sexton was carrying a knock, he has been named on the bench for the game.

“There are a lot of different factors but ultimately for us, we have come off a huge final which we’ve lost, unfortunately,” said Cullen after their captain’s run. “And very similar in terms of how we tried to manage the group last year, we’re trying to get a bit of fresh energy into the team and it also gives us a lot of experience coming off the bench, particularly with Johnny and Scott Fardy. Having those two leaders to call on later in the game if required, so there’s a little bit of that in it.

“Ross has done well during the chances he’s had, played a lot of games for us this year, built up a huge amount of experience, so another positive step for him as well.”

A couple more of those quartet of changes has been enforced, with unspecified minor niggles ruling out Rob Kearney and Seán O’Brien, so denying O’Brien an RDS farewell before his summer move to London Irish. The former is replaced by his brother Dave and the latter by the fit-again Josh van der Flier.

“Yea, Seánie didn’t quite come through the week,” said Cullen. “We thought he would initially, he trained yesterday and didn’t come through that and that ruled him out. Hopefully he’ll be okay for next week if there is a next week.

“Rob is similar. He’s actually okay now, he’s not a million miles away. It’s just seeing about how he gets through the week, we want fit guys ready and everyone able for the challenge we’re going to face.

“It’s important to have that respect for what they committed to last week and have respect for the opposition we’re facing this week. I’m being a little vague here, hopefully everyone understands where I’m coming from.

“It’s going to require a full, physical effort from everyone this week because they’re an opposition that are highly motivated. I’ve heard numerous people in their team over the course of the season talking about how desperate they are to win silverware before leaving the province, so we know it’s going to be a great challenge.”

O’Brien’s loss has been offset by the return of Van der Flier from a groin operation sooner than expected for his first outing since Ireland’s penultimate Six Nations game against France.

“Especially at this time of year it’s important when you get a couple of guys back, it’s a huge boost to everybody,” said Cullen. “Josh has worked incredibly hard to get himself back which is great. At the time, I didn’t think he would be back in time but he has worked very, very hard. He is so meticulous, Josh, and he has given himself every chance. He trained hard last week and re-integrated back into rugby and has come through everything. It’s good to have him back in there.

“He’s still involved in everything but in terms of full-on training, he was back last week. He has made himself available at the start of this week and he’s good to go.”

The other change sees the return of Rhys Ruddock, with Fardy on the bench, which also features a new frontrow of Ed Byrne, Bryan Byrne, Andrew Porter and Nick McCarthy, and thus there are no places for Jack McGrath, James Tracy, Michael Bent, Hugh O’Sullivan and Jamison Gibson-Park.

Ruddock will again captain the side and admitted it had been “a hugely disappointing couple of days” after last week’s loss. “But we kind of made a point of getting back together and bouncing back from it with a huge opportunity ahead of us this week. We couldn’t afford to do anything else. Put it to bed on Monday and picked apart the game and there were actually a lot of positives we can build on and the beauty of sport is we have another opportunity this weekend.”

Leinster were overcooked emotionally when they lost to Munster at Thomond Park in December in a game featuring a red card for James Lowe and yellow cards for Cian Healy and Tadhg Furlong, all in the first half-hour.

“At the time we would have reviewed that quite intensely and learnt a lot of lessons from that game,” admitted Cullen. “Whenever you play against Munster, you know you need to be up there physically and in the right frame of mind. They’re a hugely physical team, hugely combative and we probably didn’t get the balance right that day. We ended up leaving ourselves in a difficult situation so there were huge lessons learnt from that but that helped us going onto later stages in the season.

Asked if he was surprised to see CJ Stander wearing No 7 for Munster in a bulky backrow featuring Arno Botha at No 8, Cullen said: “I’d heard rumblings all right, Arno Botha has been going well for them as well. A big, strong, physical presence that backrow that they have, so yeah we thought Botha would feature at some stage.

This semi-final will also mark Joey Carbery’s first appearance at the RDS since this game a year ago, when he lined out at fullback for Leinster. Asked what kind of welcome Carbery might receive, Cullen chuckled and admitted that was a good question.

“From the players or the fans? I don’t honestly know. Yeah, it’s strange. Obviously Joey came in and played this game last year and the Wednesday after the season finished, the Pro 14 final, I got a call from Joey telling me he was moving off.

“So, yeah, we were gutted to lose Joey last year with the investment gone into him but that’s part of the sport, you know?

“In theory, we thought he was going to be still here, involved with us, at this stage of the season but he’s playing for another team now and we just have to get on with it and move on.

I’m not sure what sort of welcome he’ll get, we’ll wait and see.”