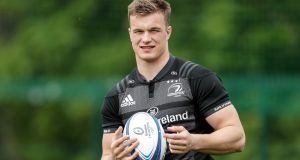 For the second season running we have a third meeting in this rivalry, one that over the last decade and more can have legitimate claims to being the biggest in the world below test level. So one can never get too much of a good thing.

As is ever the case, and akin to this weekend a year ago – same place, same prize at stake – the RDS will be packed to an expanded 18,977 capacity with a vibrant concentration of blue and red.

Last year, when coming off the high of a fourth Heineken Cup when beating Racing, Leinster freshened things up with six changes. It would seem to constitute a declaration of their desire that this time there are four changes – at least two of which are partially enforced after Sean O’Brien and Rob Kearney were ruled out with unspecified minor knocks which would not rule them out of the final in Celtic Park a week hence – if Leinster reach it.

So Dave Kearney comes in, with Jordan Larmour switching to fullback, while Josh van der Flier completes the latest of his remarkable swift comebacks, this time from a groin operation.

Rhys Ruddock returns to captain the side, with Scott Fardy on the bench where, curiously, he is joined by their captain, record points scorer and World Player of the Year, Johnny Sexton, as Ross Byrne is handed a start as he was for the corresponding game a year ago.

Meanwhile, Munster appear to have made a statement of intent by adding Arno Botha to their back-row, with CJ Stander wearing 7, while also recalling the fit-again Joey Carbery and Keith Earls and reinstating John Ryan.

There’s probably an element of rewarding Byrne, who has started 11 of Leinster’s Pro14 games this season as against Sexton’s four, the last of which was in that infamous defeat by Munster at Thomond Park in December.

“He did the majority of the week, yes,” said Leo Cullen in reference to Sexton. “He’s leading in a slightly different role this week and he’s such an important voice in the group.”

Noting the different dynamic in returning to more domestic matters after a first European final loss, Cullen commented wryly: “It’s definitely different this year because last year it was a challenge to try and get them back in post, the celebrations. This year it was very different, because I think people would have liked to play the actual final the following day again. They want to just play a game again.

“You’re trying to gauge the group the whole time. The disappointment is then just trying to stay on course now and refocus the minds into this week for, again, it’s an amazing challenge.

“These games have a whole life to themselves. Form books very much go out of the window and it’s very much on the day,” said Cullen, citing another unpredictable factor work when glancing out at a heavy shower.

Alas after the week that was in it, the weather has turned dirty and the forecast is for sunny spells in the morning leading to showers developing by the afternoon, “some heavy and possibly thundery”, according to Met Éireann.

It’s also a big game for the relatively inexperienced Mike Adamson and, as Frank Murphy discovered last December, it could well be another feisty encounter. One hopes he has a good one.

History suggests home advantage could be significant. It’s a measure of Leinster’s unrivalled standards in this competition that they are playing in their ninth semi-final in the last 10 years, and all have been at the RDS, where their only defeat at this stage was to Scarlets two years ago.

This is also Munster’s 10th semi-final where their record is won five, lost four. The two have met in five previous semi-finals in all competitions with Munster taking the first two and Leinster the last three. Munster’s only victory at the RDS in six visits was in 2008, since when they have lost two semi-finals in 2010 and 2018.

Johan van Graan is more interested in how his own team perform, but nonetheless expects a big reaction from the holders to losing one of their two titles last weekend in Newcastle.

“I expect a very good performance from them. They are a fantastic rugby team,” said van Graan, noting the disappointment and the “fantastic” individual performances of James Ryan and Tadhg Furlong last week.

“As a collective, they will pull together, it is Munster v Leinster and as we saw on the 29th of December last year, I think it will be a big encounter, two hungry teams, they will want to get into a final and we are desperate to get into a final. In terms of Irish rugby, the two previous games were sell-outs, it is 1-1 in the season. I guess the winner takes all going into the final, so I expect a massive contest.”

It should certainly be that. While Munster are ravenous for a first trophy since 2011 and this is set up for a huge performance by them, Leinster’s hunger will also have been accentuated by events last week.