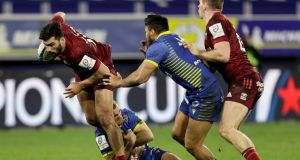 After an almost impossible 2020, Munster coach Johann van Graan has earned the right to speak about processes and any other cliche that springs to mind.

When the longest concurrent seasons we will ever know began last August, it took just seven minutes for the brightest of futures to be destroyed by RG Snyman falling to earth. The giant Springbok lock is a few months off recovery from that ACL tear but at least the other World Cup winner, Damian de Allende, has shown up when Munster needed him most.

For example, while trailing by 28 points in Stade Marcel Michelin last Saturday night, De Allende shaped to thunder into three Clermont defenders only to produce the softest of hands for Gavin Coombes to lead the charge. Peter O’Mahony’s equally subtle offload before contact had Mike Haley carrying Alivereti Raka over the try line.

Munster never looked back on their way to a famous 39-31 victory that silences any who doubt the direction Van Graan is taking the organisation.

“Munster had never beaten Clermont in Clermont so that is a big achievement,” said Van Graan. “We’ve got a lot of belief in what we do but to go and win in France the way we did will certainly kick us on to another level mentally.

“I want to say as well that we were by no means perfect but we take what we can out of that game and move on to the next one.”

Hold your horses, Johann. Leinster on St Stephen’s Day will keep, but Tuesday’s media briefing demanded a moment of reflection that does not include the questioning of Munster’s capability.

“I think what Damian brings is somebody who has won trophies before, in terms of he has won a World Cup, he has won a Rugby Championship. I think he is at the peak of his career in terms of what he brings, not only on attack, but his defensive breakdown is incredible.

“He certainly gives the team a lot of belief and a lot of calmness. That’s why we signed Damian because we believe he is close to the best in the world in that position. He performs well in big games. I have known that from coaching him with the Springboks. He certainly showed that again on Saturday evening.

“Look, he is invaluable to us. Obviously the fact that South Africa didn’t play in the Rugby Championship means that he has been playing a lot more.”

In so many ways, victory in Clermont infuses Munster with a belief that the South Africans are being handsomely paid to develop.

“I think I have mentioned this before,” Van Graan continued, “when I spoke to Damian and RG, I said ‘It’s very important that you understand why you are coming to Munster, you are coming to a club that wants to achieve, you need to come and add to this club’, which they are certainly doing.

“You are coming here to become a better rugby player, which both of them want to become. So, I believe there is a lot more to come from him.

“A few things in his game that he still needs to improve. He has worked hard on his kicking game. I don’t know if you remember but after one line break, he had that kick into the right-hand corner. There is always room for improvement in this game.”

That is how Munster enter the Christmas period – nit picking the kicking game of the best inside centre in the world. Van Graan, who will not select Ireland prop Dave Kilcoyne this weekend, quickly dispels any hint of arrogance with a plethora of statistics about their arch rivals.

“Leinster have been the champions for the last three seasons. I think they have won 26 games in a row, with nine bonus-point victories with four tries over the last few months, so the quality in their squad that we are going to come up against is undeniable.”