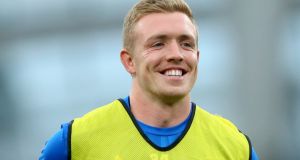 Dan Leavy has been named on the Leinster bench for Friday’s clash with Zebre. Photograph: James Crombie/Inpho

Dan Leavy is poised to return to action for the first time since suffering a horrific knee injury in a Champions Cup quarter-final match against Ulster at the Aviva stadium in March of last year. He is named among the replacements for Leinster’s Pro 14 game against Zebre in the RDS on Friday night (7.35).

It’s a significant landmark for the 26-year-old Leinster and Ireland flanker, who has worked so hard to overcome the injury and also for his province and country in the return of an outstanding player.

The 21-year-old Turner was part of the 2019 under-20 Grand Slam-winning side, so too Hawkshaw, who captained the team before a serious knee injury suffered in training before the French match in that campaign.

Sheehan, 22, was promoted to a senior contract during the summer but has been unavailable because of a cheekbone injury. Devin Toner will make his 250th appearance for the province.

On the bench, Parker is in line to make his Leinster debut should he be introduced. The 25-year-old signed for Leinster last month on loan from Jersey Reds having previously played with Sale Sharks and Munster.