Ireland head coach Andy Farrell says he is excited to watch debutants Hugo Keenan and Will Connors - with Ed Byrne and Jamison Gibson-Park set for first appearances off the bench - as the Six Nations resumes against Italy. Video: VOTN 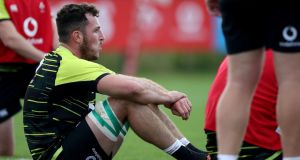 Will Connors will make his Ireland debut against Italy. Photograph: Dan Sheridan/Inpho

Andy Farrell’s 23-man squad to face Italy in Saturday’s Six Nations restart at the Aviva Stadium includes four uncapped Leinster players as Hugo Keenan starts on the left wing and Will Connors is at openside, with Ed Byrne and Jamison Gibson-Park named on the bench.

The 24-year-old starters both came through the Leinster schools system, Keenan at Blackrock and Connors at Clongowes Wood, before featuring on James Ryan’s Ireland Under-20s side that reached the World Cup final in 2016.

Both players also had a stint away from 15s with the Ireland Sevens.

“Hugo has had a great start after lockdown,” said Farrell. “They are both ready to go, definitely.”

Connors is a surprise selection over Josh van der Flier, although Leinster did prefer him at openside for the defeat to Saracens in last month’s Champions Cup quarter-final. Munster captain Peter O’Mahony provides cover for a backrow that also includes CJ Stander and Caelan Doris.

“We think Josh is a great player and he always has been for us,” Farrell explained. “We think Will adds a little bit of mobility to our backrow and obviously defence is a big part of his game.

“With CJ Stander and what we have seen over the last few weeks in terms of his presence over the ball, Will gives people like that opportunities as well. Not that Josh can’t do that, he definitely can. Josh is doing nothing wrong. It’s just a case of giving Will his chance and let’s see how he goes.”

Ed Byrne, 27, has pressed Cian Healy for selection at both Leinster and Ireland this season while Gibson-Park, a former New Zealand schools scrumhalf, qualifies via residency to understudy for Conor Murray.

“Jamison, we all know by watching him play that he is a calming influence. He definitely is that to the team. He will add a different dimension when he comes off the bench. Both of them will.”

Jacob Stockdale at fullback is another notable selection, having featured there for Ulster since the restart in August.

“It’s unbelievably tough when all five of the centres are fit. We have massive trust in Robbie. He has played a hell of a lot for us and he is going to come off the bench and do a great job but Stu McCloskey and Chris Farrell are great players that we all admire as a coaching staff.”

Second row options are reduced by injury to Ryan Baird and Quinn Roux (shoulder), and Iain Henderson’s suspension, so Tadhg Beirne and Ryan start with Ultan Dillane on the subs.