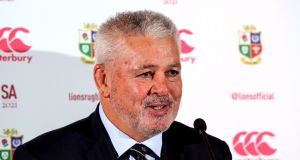 The British and Irish Lions said on Wednesday they will host Japan in Edinburgh next June ahead of their tour of South Africa.

The Lions, who traditionally tour Australia, New Zealand or South Africa every four years, will be playing Japan for the first time, with the match to be held at Murrayfield on June 26th.

It will mark just the third time the Lions have played on home soil following games in Cardiff against Argentina in 2005 and a Rest of the World XV in 1986.

“We saw Japan play some excellent rugby during the World Cup and they will come to Edinburgh fully-motivated to win,” Lions head coach Warren Gatland said.

“They are a talented side who play high-tempo rugby, so it’ll be a good challenge for us ahead of the Tour, and a chance for the match day squad to put their hands up for Test selection.”

Japan head coach Jamie Joseph said it was a “once-in-a-lifetime opportunity” for the players.

Lions’ Managing Director Ben Calveley said it would be a unique experience for home fans, too.

“A Lions Test is one of the most iconic events in world sport but a huge number of fans from the Home Nations never get the chance to see one live,” Calveley said.

“It will be an, ‘I was there’ moment, against an entertaining and highly-respected opposition.”

The Lions play South Africa in three Tests in July-August.