Six changes on the cards, including four Test debutants and return of Garry Ringrose

Ireland head coach Andy Farrell says he is excited to watch debutants Hugo Keenan and Will Connors - with Ed Byrne and Jamison Gibson-Park set for first appearances off the bench - as the Six Nations resumes against Italy. Video: VOTN 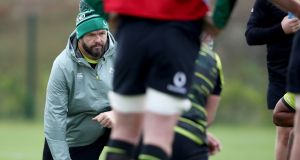 Nothing illustrates the changed circumstances eight months on from when the original 2020 Six Nations game against Italy was meant to take place than the probability of four players making their Irish Test debuts at the Aviva Stadium this Saturday.

At that point in time, the 24-year-old pair of Hugo Keenan and Will Connors, selected on the left wing and openside flanker against the Azzurri, had started just 10 and 11 games for Leinster, and had yet to appear to play a European game, albeit the latter had made the Irish squad. The two had also taken a diversion onto the Sevens circuit and had their injury woes.

You don’t give people their debut until you think they’re ready. Seven months has changed that way of thinking

Hence, Ed Byrne and Jamison Gibson-Park, the replacement loosehead and scrum-half, had built up a more substantial body of work. But, prior to the resumption, they were still deemed back-up for the big games in Leinster, and neither had made an expanded Irish squad.

Noting that “there are four potential debutants in there”, Andy Farrell said: “It’s a great place to be as a coach. Obviously you don’t give people their debut until you think they’re ready. I suppose seven months has changed that way of thinking.”

Of the quartet of uncapped players, indeed of this match-day squad, undoubtedly Keenan would have been the longest shot to make the team when rugby returned at the end of August. But, injuries having opened the door at Leinster, he grabbed his chance, and has impressed Farrell and the coaching staff in camp as well, not least with his capacity – honed on the sevens circuit – for covering acres of ground, and his unstinting bravery.

“Obviously, with the Sevens background, he’s some athlete. He glides across the ground,” said Farrell. “I suppose, one of his points of difference is what he does off the ball. His work ethic off the ball goes a little bit unseen.

“People like him work selflessly for the team and allow things like the team attack to tick. He’s a bright boy, he picks things up very quickly. He’s a personable boy and he’s mixed in with the group very well, which is a challenge coming into a new group, especially when it’s the first time. He’s not been in the squad before like Will Connors or whatever.

“So, I’ve been very impressed with his attitude and his manner and his work ethic. He’s very dilligent and a talented rugby player on the back of it.”

Throw in the return of Garry Ringrose at outside centre, Andrew Porter at tight-head, the fit-again Tadhg Beirne in the second-row for just his second Six Nations game and the return of Caelan Doris for his second start, and there are six changes in personnel from the starting XV last time out against England.

There’s also a positional switch with Jacob Stockdale moving to full-back, as well as a new replacement front-row featuring the Connacht duo of Dave Heffernan and Finlay Bealham as well as Byrne.

Having reshuffled his hand, Farrell looked at the selection and concluded: “I like the team to be in sync first and foremost and the way that we trained today, it seemed like we’re getting there, y’know? There is a unity amongst them, a determination to try and play the way that we’ve talked.”

“I think we’ve got a team that is adaptable. Of course there are going to be areas, like I talked about last week, in the way that we’re going to go forward that might take a little bit of time but being very adaptable and learning quickly at the same time.”

The forecast for Saturday is to be wet and windy.

Certainly this is a younger, less-experienced team and squad. All told, the total number of caps in the starting XV has dropped from 682 at Twickenham to 467 this Saturday, and in the match-day 23 from 846 to 608.

“It’s been a strange old one, I suppose,” he said, reflecting on a low-key anniversary in the squad’s bubble between their High Performance Centre in Abbotstown and Carton House. They all sleep in separate rooms and observe social distancing and wear masks everywhere bar the training ground, and won’t return to their families until after the French game on Saturday week.

“Just chatting to Ger Carmody there, I’m sure we speak for everyone, it’s strange old times. It isn’t just about my year as head coach. It’s about the year that the whole world is having.

“How we’re adapting in camp is completely different to how we did it seven months ago, but we’re able to adapt and we’re privileged to be able to get back to work and to be able to do what we love doing, so hopefully we can give a good account of ourselves at the weekend.”

Farrell and all in the squad are acutely conscious of the huge terrestrial TV audience which will be watching them on Saturday, even if he’s mindful not to “burden the players” with this additional responsibility.

“We all know that every Irishman is a proud man and we all stick together when there’s a bit of adversity that’s happening at this moment in time, but at the same time it’s about the performance. We’ll be judged on the performance on Monday and let’s hope we’ve lightened the mood of the country as well.”