James Lowe to remain with Ireland squad as Kearney, Tracy and Byrne return to Leinster 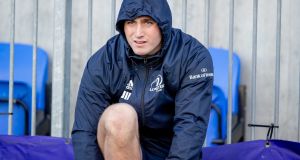 Leinster and Ireland will be without Jordan Larmour over the coming weeks. File photograph: Inpho

Leinster updated the initial prognosis by stating in a medical bulletin: “Jordan Larmour had a procedure last week on a dislocated shoulder and will be missing for up to 16 weeks.”

That timeframe, if accurate, would rule him out of the six Ireland test matches before the end of 2020 and also the first two to three games in next season’s Six Nations Championship, while he would also miss the pool stages of the 2020-2021 Heineken Champions Cup that begin in December. It’s a blow for the talented young player on a personal level but also for his province and country.

Dan Leavy will increase his training load this week but there is no further news on a likely return date for Lions, Ireland and Leinster tighthead prop Tadhg Furlong (back/calf). Ryan Baird’s adductor muscle injury sustained in Italy keeps him sidelined.

There was some better news for Leo Cullen’s squad ahead of their Pro14 game against Zebre at the RDS on Friday night with Dave Kearney - he along with James Tracy trained with the Ireland squad last week but have been released back to the province - has recovered from a hamstring injury. Ciaran Frawley has passed the return to play protocols while hooker Dan Sheahan is available following a fractured cheekbone.

Peter O’Mahony and Chris Farrell joined the Ireland squad on Monday while Munster duo Craig Casey and Fineen Wycherley and Leinster’s Harry Byrne have been released back to their provinces. James Lowe will remain with the national squad.

Antoine Rozner pips Andy Sullivan in Dubai smash and grab 12:54
Wallabies fall short as they draw with Argentina in the rain 11:38
Emiliano Grillo storms into the lead in Mexico 08:36
Jim McGuinness: Cavan need illogical courage and variety to down the Dubs 07:00
Ireland retirement was ‘hardest decision’ for David McGoldrick 06:30
Here is your handy guide to sport on television this week