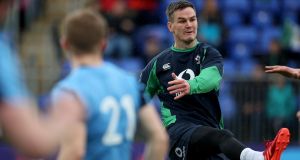 File photo of Ireland captain Jonathan Sexton who is fit and ready to play against Italy in this weekend’s reshceduled Six Nations match. Photo: Dan Sheridan/Inpho

The Irish rugby team is among the privileged few afforded the opportunity to lighten our lives with a distraction following the imposition of Level 5, and they are aware of this. What’s more, Ireland are back on terrestrial television, as well as the pitch, for the first time since the loss in Twickenham on February 23rd.

Accordingly, the Irish captain Johnny Sexton admits they are acutely mindful of the added responsibility on them to deliver a performance.

“Not so much ‘putting on a show’ but you feel a bigger responsibility with the restrictions that have come in and the country going back to Level 5. There’s obviously a sense that the whole country will be watching us.

“Most of the time, we’re lucky they are. We’re always being looked at, but I suppose it’s an even bigger responsibility. I suppose Italy will be in the same boat as us. Both teams will be motivated. Any time you play for Ireland it’s a big responsibility, but yeah, there’s a little bit of an extra onus on us this week.

Sexton, who returned to training on Saturday before a full session yesterday which he says he feels good after, talked about how all has changed, changed utterly since the squad were last together.

“It’s worlds apart, isn’t it? Everything is different. We’re living together essentially in the same bubble, but we still have to maintain social distance at dinner - so we’re only three at a table, you’re queueing two metres apart. All the restrictions that apply outside essentially apply to us as well.

“It’s not like normal camp, but it’s the new normal now. We’ve had a few days together and we’re slowly getting used to it. Look, we’re very lucky and privileged to be able to do what we love to do, which is to get a chance to represent Ireland, to be together and be able to do our job. We’re the lucky ones, so we can’t give out at all about the restrictions being put on us in camp.”

The highlight is training.

“The most normal thing we’re doing at the moment is rugby training. We don’t have to wear masks, we can be around each other outside. That’s always the time we feel most comfortable and it’s even more evident now, running out on the pitch is the most normal life gets.

“You go into meetings (indoors) and it’s masks on, two metres, we have most of our meetings on the pitch because it’s outdoors. It’s very different, camp life, but we’re very lucky to be able to keep doing what we’re doing. There were fears that ‘if the country went to Level 5 would we be allowed play at all?’ So we’re very grateful for the chance to be able to continue as is.”

By the same token, the squad cannot allow the need for a performance to become overbearing.

“That’s the balance that we have to find. We don't want it to be a burden. You guys are asking about the duty we feel, but we don’t want that to weigh us down. We want to use it as an opportunity, we’re privileged to go and do our thing in front of the country. That’s why you start playing the game as a kid... so we can’t let that be a massive pressure on us.

Asked what style of rugby might we see from this Irish team Sexton said: “Hopefully a winning style. It depends on the conditions, depends on how the opposition defend us. We can’t say it’s going to be one way or another. We’ve to see what happens.

“We saw through the Six Nations how, against Wales, we got show some really good stuff. Tried to do some of the same against England when it probably wasn’t on and we got found wanting.

“It’s about picking a time when we attack, when we kick and play the conditions and defence as we see it. The most important thing for us is that we win, get the result. That’s what this game is about and it’s what we’re focused on.”

With Jordan Larmour recently joining Keith Earls and Will Addison amongst others on the sidelines, there’s every chance either Hugo Keenan or Shane Daly will on Wednesday be named in the side to face Italy on Saturday, and Sexton was asked how Keenan was acclimatising himself to his new surrounds.

“He’s picked up where he left off in Leinster, which was outstanding. He’s been excellent for Leinster since getting his chance. Whether he’s on the wing or 15, he’s gotten into the squad and he’s pushing now to try and get in the team.

“I can’t say he deserves it more than anyone else because I don’t see what goes on in the other provinces, but the hard work he’s done for Leinster... whether the coaches think he’s ready to go or not, he’s definitely put his hand up in training and doing all the right things.

“It was a good competitive session out there which is exactly what coaches want, they want guys trying to force their way into the team. It was a good start to the week and hopefully, we’ll keep going tomorrow.”

Mourinho says more than pride at stake as Spurs host Arsenal 22:30
Paul Boyle’s hat-trick helps Connacht past Benetton 22:06
Jones targeting final victory as a springboard to a better place 22:05
Fifa make no allowance for minors moving from Republic of Ireland to British clubs 19:40
Pride, passion and a bit of madness - football runs through Cavan’s soul 20:25
Crossword Get access to over 6,000 interactive crosswords