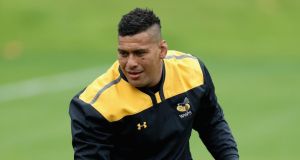 Nathan Hughes has been suspended for six weeks and is unavailable for three of England’s four autumn internationals next month after his “what a joke” tweet led to two extra weeks being put on to his suspension on Wednesday night.

Hughes will miss England’s matches against South Africa, New Zealand and Japan after his suspension was confirmed following a Rugby Football Union hearing that lasted almost five hours. The Wasps No 8 was initially in the dock last Wednesday, charged with punching Gloucester’s Lewis Ludlow in the head, but an ill-timed tweet delayed proceedings until Wednesday night.

It had been agreed by the initial disciplinary panel last week that Hughes would face a four-week ban – down from six for his guilty plea and mitigating circumstances – but when his tweet, which was written after he had been informed of his punishment, came to light, his hearing was postponed by seven days. He was summoned back into the hearing but it was decided it could not resume because his lawyer had left the venue.

At Wednesday night’s hearing, Hughes was also charged with conduct “prejudicial to the interest of the game”, for which he pleaded guilty. The panel opted to deny Hughes the mitigation he had been granted last week because his initial plea of not guilty no longer stood. He was also handed a two-week ban for his tweet – to run concurrently alongside his six-week suspension – meaning he will be available for England’s last autumn fixture on November 24th against Australia.

It brings an end to a sorry tale which has seen Hughes delete his Twitter account and the upshot is that Eddie Jones’s headache for the autumn internationals has only gotten worse.

Jones’s options at No 8 for the November series were already diminished with long-term injuries to Billy Vunipola and Sam Simmonds and while he would have expected Hughes to be banned, it only rubbed salt into the wounds that a needless indiscretion on social media has cost him his availability for two Tests. Hughes also loses out on two match fees to the tune of £50,000.

Chris Robshaw is also unavailable after undergoing knee surgery on Tuesday, meaning that Jones, who picks his 36-man squad on Thursday, may well have to field a back row against the Springboks on November 3rd that boasts less than 10 caps between them. – Guardian service