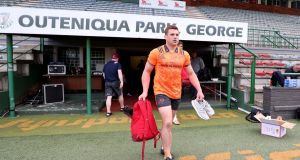 Outeniqua Park gates open at 1pm with the Southern Kings promising “a festive air to the occasion that will appeal to the whole family” for their first-ever game in the “picturesque Garden Route city” famous for producing four-time Major winner Ernie Els (twice runner-up at the Masters).

Its second-best export has to be Munster captain CJ Stander.

This is the antithesis of a prodigal homecoming. Stander recently signed a three-year IRFU contract to remain an Irishman at least until June 2021, but this South African hails from the land fate has guided him back to this evening.

The Stander family farm is nearby.

Johann van Graan made a wise decision to bring a fully stocked squad on this two-match mini-tour of the homeland – they are based in Cape Town – in what has been transformed into an ideal warm weather camp ahead of the Champions Cup semi-final against Racing 92 on April 22nd in Bordeaux.

Simon Zebo is nursing an injury but Stander is not the only frontliner forced into action as Ian Keatley starts at outhalf, Jean Kleyn at lock, alongside Gerbrandt Grobler (his second start for the province), Alex Wootton and Rory Scannell.

Others – like the entire frontrow of James Cronin, Niall Scannell and John Ryan – get the opportunity to stake a claim for a starting XV slot on return to European action.

In Zebo’s absence, JJ Hanrahan is provided the opportunity to turn around what has been a disappointing return after two seasons in Northampton.

Van Graan faces the same issues as Leinster coach Leo Cullen in that Munster want to keep as many key players wrapped in cotton wool yet also secure a home semi-final in the Pro14, thereby avoiding the quarter-final play-offs.

That’s almost an impossible ask, with Glasgow 12 points clear at the top of Conference A with a game in hand. Munster have two more regular-season games to play against the Cheetahs, who are six points behind in third place, next week in Bloemfontein and home to Ulster.