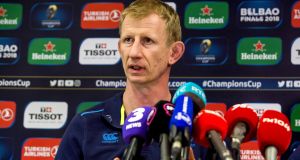 Leo Cullen: “I didn’t know we were favourites. I am surprised because I would have thought Saracens were favourites because they have won the tournament the past two years.” Photograph: Laszlo Geczo/Inpho

The royal house of European rugby has fluctuated from Martin Johnson’s uncompromising Leicester Tigers at the turn of the century to the regal Toulouse of Jauzion, Pelous and Clerc being punctuated by Dallaglio’s Wasps before Munster nearly men savaged their chunk of glory with Axel and Rog at the helm.

Then came Croke Park in 2009, a happening that already seems more myth than reality, as Leinster rose from underneath Lunster and ladyboy brickbats to rout mate Paul O’Connell’s Red Army at their peak.

Leo Cullen was the captain as three titles in four seasons were gathered before the money men rolled in. The spectre of Boudjellal’s millions gifted a Toulon threepeat as the Northern Hemisphere game slid deep into the mire of greed.

The Irish provinces seemed finished as genuine contenders when multi-national Saracens kept Clermont weeping into the Bouchelleir de Brennus. And now, by the skin of their teeth, Brad Barritt, the burly South African with England caps, leads them across the Irish Sea on Easter Sunday to quell the latest blue uprising.

New Leinster have links to all three stars on the jersey via Sexton, Rob Kearney, Nacewa and Cian Healy but this era is being built upon the shoulders of St Michael’s boys turned men. See James Ryan seek out Maro Itoje from kick-off at Twickenham on that momentous St Patrick’s Day, see Dan Leavy make Seán O’Brien’s failed fitness test bearable, see the every increasing importance of Luke McGrath at scrumhalf.

Back in December when Exeter, the English champions having dethroned Saracens, brought gruesome physicality, and the Leinster line held, it felt like another epic journey was in motion.

Alas, the break, despite Grand Slam spoils, could only conjure nightmares for Cullen.

“That push on in the Six Nations, taking the next step, they have come back the same hungry players they were when they left. We qualified for the quarter finals against Glasgow. We then went away against Montpellier, made a number of changes [in came the towering Ryan], and that was important because you want to build depth for all the eventualities that may take place over the course of a season, and yeah, we would have loved to have played the quarter-final the following weekend but we knew we couldn’t.

“And once we saw Saracens, we thought, whoa, Saracens, because that is the ultimate test for us.”

The bookmakers retain unshakable even after Mark McCall named Owen Farrell at outhalf with the handicap spread extended to seven points in Leinster’s favour.

“I didn’t know we were favourites, I am surprised by that,” said Cullen, “because I would have thought Saracens were the favourites because they have won the tournament the past two years. What has changed from their end? Not a huge amount.”

Well, Billy Vunipola does represent a huge amount. On even money plenty of English punters will sample that wager even if Saracens, like England, look a lesser outfit sans Mako’s little brother.

What a contest this promises to deliver. Seán O’Brien, agonisingly, failed a fitness test on shoulder and hip Friday morning but Rhys Ruddock passed his test. A total of 12 Irish and five English will be reacquainted with each other but, as Cullen put it, don’t forget the “Argentineans, Australians and South Africans”.

Jack Conan’s medial knee ligament damage forces Jordi Murphy to number eight as Scott Fardy joins Dan Leavy on the flanks in what promises to be a fascinating duel against Schalk Burger and teenager Nick Isiekwe.

“Are we ready? It is hard to say. We have tried to deliver a clear plan to the players, the players have taken it on board now, and we just need to go out and do it. They are hungry to do so, they want to succeed.”

The ruling rugby house of Europe can rise from the ashes of this game.

Leinster by the skin of their teeth.