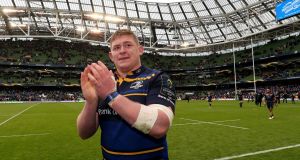 Tadhg Furlong: in the Leinster line-up to face Zebre at the RDS. Photograph: Dan Sheridan/Inpho

If Leinster are ever short a few euro they could charge entry to the various Seán O’Brien comeback sessions throughout a season.

Last week’s training was particularly wincing. Whatever crazy lengths O’Brien and Rhys Ruddock reached to prove their fitness – the former failing, the latter succeeding to make the match day squad for Saracens – has come at a cost.

Neither flanker will feature in this or potentially next weekend’s Pro 14 games against Italian opposition.

“Confident? Hopeful,” replied Leo Cullen. “Seánie pushed incredibly hard to get back last week and he was involved in the rugby sessions at training. With his shoulder, he did push it to be fair, so this week he trained a little more separate to get himself right. Hopefully he will be in a position to potentially play next week. We’ll wait and see.”

Ruddock, Cullen added, is a fresh concern after suffering “a dead leg that set him back a little bit” when coming off the bench for Scott Fardy to play the last 16 minutes of the Champions Cup quarter-final.

“We’ll see how he is next week, but I’m not entirely sure what his involvement will be, which is frustrating for Rhys, for all of us, but him in particular, but I don’t think it is anything too major.”

That means Dan Leavy, Josh Murphy and Max Deegan fill the Leinster backrow today. Cian Healy and Tadhg Furlong are also retained in the pack as the props must have leftover IRFU player management minutes.

Furlong did miss some of the Six Nations with a hamstring strain while Leavy didn’t start against France. Considering his injury profile, Healy is having a season that borders on the miraculous.

That aside, it’s difficult to dress up a fixture when the bookmakers are offering a 34-point swing despite Leinster digging into their 53rd squad member.

But we’ll give it a go. The result matters because Leinster do not want to be playing a quarter-final play-off, potentially in Bloemfontein, a week before the Champions Cup final in Bilbao. They would prefer that weekend off and back-to-back RDS victories over Italian sides should guarantee such a buffer.

If Mullin (number 53) makes his debut off the bench he follows a long line of Blackrock centres in Leinster blue, which includes Brendan, who held the Irish try scoring record (17) until Brian O’Driscoll (46) came along.

“[The pressure of being Brendan Mullin’s son] doesn’t seem to faze him,” said Cullen. “Gav has really impressed training-wise. He has probably jumped over a number of other guys who were in and around those outside back positions.”

Conor O’Brien and Rory O’Loughlin are the starting midfield pairing.

Jamison Gibson-Park gets to link up with his former New Zealand under-20s pal James Lowe as Luke McGrath, like O’Brien and Ruddock, is in a race to be healed for the Scarlets semi-final on April 21st.

“We’ll see how Luke goes next week, if he starts running or not, he is walking around in a boot at the moment.”

These days Leinster can get by without O’Brien, Ruddock and almost any player but McGrath’s absence forces multiple changes as selecting Gibson-Park for the Champions Cup probably means Lowe gets removed from the panel. Just as Jordan Larmour returns. When you have a panel of 53 players – and plenty more queuing up behind – there will always be a silver lining.