Connacht mark a special day in style with win over Leinster 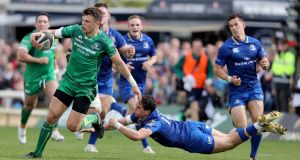 If only Connacht could have John Muldoon retire every week, or at any rate play more interpros. In scoring seven tries to one over Leinster on Saturday, Connacht registered a record win over the European Champions Cup finalists and also completed a historic clean sweep at the Sportsground over their provincial rivals.

After a disappointing season, it left most of the 8,124 capacity crowd in raptures. Some of the tries were crackers, not least the bonus-clinching fourth initiated and created by man of the match Shane Delahunt, who won the ball in contact and then slipped a one-handed, under-arm offload for Niyi Adeolokun to score his second, having earlier set up Kieran Marmion’s first with his burst and offload.

There was also Tiernan O’Halloran calling for Jack Carty’s deft chop with the outside of his boot, and gathering it on the full to create Kieran Marmion’s second, as well as big games by Gavin Thornbury, Bundee Aki, and, of course, Muldoon himself. But they were all up for it, and on it.

Connacht’s performance will add a more positive light to what Kieran Keane described as a “robust review” of their season, collectively and individually, as well as act as a marker for next season.

“We have had that inside us,” said Keane of this “stunning” performance. “We have taken a fair bit of heat from all quarters. These interpros bring out the best in us. It’s nice to create a little bit of history for the team. But also a little bit of belief. The boys should feel very proud of themselves. It’s not very often you put 47 up on a champion team like that.”

Even though this third home interpro win was only their seventh of an inconsistent season, Keane maintained: “We learned some pretty tough lessons and we had to learn them too. Probably from my perspective bittersweet might be a little bit more accurate. But as far as the players are concerned, as a team we needed to learn those lessons if we are going to really be the quality team that we aspire to be.” He paused, then added: “Growing pains.”

Carty admitted: “KK [Kieran Keane] must be tearing his hair out sometimes when he sees performances like that, and then easy games [in which] we have dropped a lot of points. But it will stand to us in the coming years. We can take a lot of confidence from the lessons that we have learned and hopefully next year we can hit the ground running.”

“When we started this season we were chasing our tails. That will give us confidence, but we are under no illusions when we come back in that we have a lot of work to do. Some quality signings made, maybe a few more to come as well. Hopefully we can take confidence from that and start again next year.”

As for Leinster, this had uncanny echoes of the last day of the regular season a year ago, during Ruan Pienaar’s Ulster farewell. But whereas they lost 17-13 that day, this time they were even more obliging guests.

“He certainly got a good send-off there today,” admitted Leo Cullen. “The boys were clearly fired up for him today and our guys certainly helped with the party atmosphere around the place,” added Cullen, laughing.

Also on Saturday, Scarlets would have had to complete a 127-point swing against Dragons to top Conference B. Again displaying his penchant for gallows humour in moments like this, Cullen ventured: “I was told the Scarlets haven’t won by 100 points!”

Leinster’s Mayo-born, Blackrock-educated Caelan Doris caught the eye with some tackles and carries as he became their 55th player of their season as a late call-up for Jordi Murphy, who had a slight foot injury. Indeed, the 20-year-old first-year academy debutant made more metres in his 18 minutes on the pitch than all bar the Leinster wingers over the course of the 80.

Looking ahead to Leinster’s European Champions Cup final against Racing in Bilbao in a fortnight, it’s fair to assume no player pressed their claims here.

“It was hard to pick many positives out of that to tell you the truth,” admitted Cullen. “I don’t think we had much in the way of injuries, that’s probably about the only highlight. Caelan Doris winning his first cap was a highlight, but other than that, it was slim pickings.”