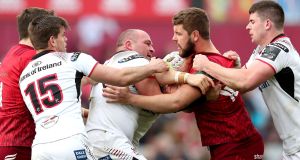 Ulster failed to win a place in next week’s Pro 14 playoffs when they drew with Munster in Thomond Park on Saturday evening. After a promising first half in which Ulster scored three tries, they fell away badly against a weak home side in the second 40 minutes and in the end left with a disappointing draw.

Ulster’s place in next year’s European Champions Cup is now also in doubt and they go into a playoff with Ospreys to see who claims a place in that competition next season. Munster will now face Edinburgh in the Pro 14 playoff quarter-final.

Munster opened the scoring when the long reach of Dubliner Nick Timoney arched over bodies at a breakdown in the Ulster 22 and caught the arm of Ulster scrumhalf David Shanahan.

When the ball fell loose, Duncan Williams was fastest to react for the game’s first try, JJ Hanrahan converting to make it 7-0 after only two minutes.

It was a perfect Munster start. But Ulster hit back immediately and within three minutes had levelled the scoring.

A Jacob Stockdale break through the heart of the Munster midfield took him to within yards of the try line. Munster wing Darren Sweetnam made ground covering and had Stockdale’s shirt. But a neat one-handed offload to Stuart McCloskey on his shoulder gave the Ulster centre a straight run in for Ulster’s score, Johnny McPhillips converting for 7-7 on five minutes.

Ulster were largely playing in the Munster half in their drive for the required try bonus win and had created forward momentum. But it would have hurt their chances when Irish lock Iain Henderson hobbled off on 23 minutes with an injury to his left knee.

Inviting Munster back into the match Sweetnam in space glided all too easily through the Ulster defence just short of half an hour into the game and sent the visitors scrambling. James Cronin took on the ball deep into the Ulster 22 before prop Brian Scott barrelled over and Hanrahan converted for 14-10.

Undeterred Ulster quickly rebounded and continued in an attack-minded vein and when Robin Copeland shipped a yellow card for infringing an Ulster maul driving towards the try line, Munster were down a man. Another driving maul saw the home side go backwards, captain Rory Best touching down and Ulster had their second try.

Seven minutes later and sensing their best attacking platform Ulster performed another driving maul, this time from an offensive lineout, Best again touching down on 33 minutes with Alan O’Connor helping his captain over the line. Within touching distance Ulster went into half-time with three tries and 24-14 in front.

Given the open nature of the match it didn’t take long for the scores to build and 10 minutes after the break Munster were knocking on the Ulster line. s Cronin thought he had scored from inches out but the referee brought play back. An offensive lineout then gave Munster a platform five metres out and they mauled the ball just short of the Ulster line. After a number of recycles Copeland found a gap and squeezed through, Hanrahan again converting to bring Munster within three points at 24-21.

The momentum had certainly shifted and it was Munster pushing into the Ulster half, the white shirts in retreat as the clock ticked past the hour.

Tempers flared with Best and Rhys Marshall wrestling and both teams weighing in but no cards were shown, Ulster still short of tries with 15 minutes remaining.

Ulster’s lineout was destroyed by Gerbrandt Grobler and three or four times the South African nicked ball before setting the visitors back on their heels.

A Munster penalty on 68 minutes gave the immaculate Hanrahan an opportunity to level and he kicked well for 24-24 as Tommy Bowe entered the match, Craig Gilroy giving way.

Far from threatening to score, Ulster were struggling to make impact and Munster continued to play in their half, slinging the ball wide.

In the closing five minutes Ulster launched a desperate offensive and a final lineout five yards out from the Munster line. But Ulster couldn’t do it, their lineout again failing and Grobler chasing up the pitch with the ball.