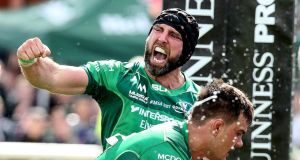 John Muldoon’s wife Lorna, who is expecting their first child, was amongst those in the crowd of 8,129 which revelled in sun-drenched weather and the occasion of the great man’s 327th and last appearance for his native Connacht. And as farewells go, this was one to tell the grandchildren about.

Muldoon even rounded it all off by converting Connacht’s seventh try of the day, yes seventh! By then they were utterly rampant, the players revelling in the still, sunny day and bone dry track (should they build an all-weather pitch hereabouts) by running in some brilliant tries as if for fun.

It was also entirely fitting that such an 80 minute warrior should have the final say.

Connacht players, supporters and most particularly, perhaps, coaches, will wonder where on earth this performance had been lurking all season, but at least they finished a disappointing and maddingly inconsistent campaign on the best of notes.

Leinster will still have a home semi-final, and are thus three games away from a historic double, but coming after their alarming defeat at home to Benetton, their Pro 14 end of season form has been in sharp contrast to their Euro highs. They have finished off their regular season campaign with just one win in six games.

Muldoon had his big moments too, not least a big rumble off the back of a very dominant scrum. But as encouraging as any aspect of this performance was the energy some of their younger guns brought to the match, notably the hooker Shane Delahunt and lock Gavin Thornbury, who had some outstanding moments. Tom Farrell too had a big game while Niyi Adeolokun was as sharp as a razor.

“I thought the lads were magnificent today,” Muldoon told the crowd after his and Andrew Browne’s careers were marked in a post-match video on the big screen. He apologised to Leinster for his conversion, and with his new coaching career taking him to Bristol, said: “Hopefully we’ll be back some day.”

He signed off by saying: “Let’s have a drink and celebrate.”

Noel Reid had led Leinster out to polite applause on the occasions of his 100th cap for Leinster, before Muldoon led out Connacht for the last time with a niece on either arm, who were also the mascots for the day, to raucous roaring.

They were celebrating as loudly within four minutes of the kick-off, which Leinster centre Tom Daly spilled. This set up a multi-phase Connacht attack, through 20-plus recycles, with Delahunt making the key contribution with a 20-metre pick-and-go as a variety to the wide-wide stuff. Pummelling close in, Connacht went wide through Jack Carty and Tiernan O’Halloran for Adeolokun to beat Joey Carbery on the outside. He also narrowed the angle for Carty to make it a seven-pointer.

Five minutes in, Leinster had hardly seen the ball, but they controlled possession and territory for a while, helped by the kicking game of James Lowe and Ross Byrne, as a couple of counter-kicks by O’Halloran drifted infield before he was turned over when counter-attacking.

When Muldoon came in from the side and was pinged by referee Andrew Brace, a voice in the Clan Terrace implored the referee: “You can’t penalise Mul today.” Carbery opened Leinster’s account with a well struck 40-metre penalty, although another would drift wide.

Resolute defending of two Leinster mauls, with Quinn Roux and Jarrad Butler at the heart of things, lifted the siege, as did the one-time Blackrock product Thornbury, when latching on for a turnover penalty.

Although Leinster pilfered Delahunt’s throw, with Jack Conan latching onto the loose ball and making yardage, when they went wide with numbers off the recycle O’Halloran read and easily intercepted Lowe’s no-look pass to score from 35 metres out.

Carty converted and when Carbery’s restart went out on the full, it would prove a costly error. Connacht’s big scrum earned another attacking lineout, and once again Delahunt made the incision with a pick-and-go up through an unguarded middle, offloading for Kieran Marmion to take the tackles of Tom Daly and Carbery to be driven over the line. Carty converted for a 21-3 lead.

Lowe atoned to a degree with a big break, albeit off a forward pass which Brace and Joy Neville missed, before Bundee Aki, though clearly pinned, was also pinged. Riskily, with the 40 minutes up, Leinster turned down the near certain three from close to the posts, by going to the corner with an all-or-nothing last play. Their scrum was under too much pressure for that to be an option.

However, despite using Devin Toner as a decoy to the front, Thornbury rounded off a mighty half – with the help of his lifters – when rising to claim James Tracy’s throw which was intended for Max Deegan further back. Muldoon dotted down to end the half, so giving Connacht more emotional energy.

And it continued to flow upon the resumption. In the second minute of the second period, when Tom Daly sought to take a leaf out of Delahunt’s manual with a pick-and-go, of all people Delahunt simply ripped the ball from him and fed Tom Farrell. The centre made a huge 50 metre break, perhaps wrongly veering infield away from the support rather than move it to three men on his outside. But from the recycle, quick hands by Marmion, Muldoon and Aki enabled Delahunt to flick an under-arm, one-handed offload away to Adeolokun, when tap tackled from behind, for the winger to skate away for his second try and Connacht’s bonus point try.

The home crowd enjoyed it even more on replay.

Far from sated, as the Clan crowd bellowed for repeated offside infringements against the fast-up Leinster defence, Carty disguised a deft chip with the outside of his boot which in the hung in the air for O’Halloran to gather on the full and beat Nick McCarthy, thereby creating a two-on-one and putting Marmion, who had run a good support trailer on the inside, away for his second try and Connacht’s fifth.

Incredibly, Carty’s conversion made it 33-10.

Connacht went searching for more, but when Carty cross-kicked for O’Halloran on half-way, his intended tap down for Matt Healy was picked off by Barry Daly, and the Pro 14’s leading try scorer ran clear for his 12th of the campaign.

Leinster had turned to some heavy artillery from the bench, with a new frontrow and Jamison Gibson-Park on at outhalf, and Jordan Larmour replacing the debutant Tom Daly at outside centre. Another debutant, Caelan Doris, became Leinster’s 55th player of the season. The Mayo-born product of Blackrock and first-year academy backrower actually had some really good carries and tackles, but from one offload, Seán Cronin smashed onto Marmion at the breakdown to concede a penalty.

Connacht were flowing now, confidence oozing from every pore, and Leinster had become ragged and just wanted it to end. The customary raft of replacements didn’t interrupt the home side’s flow, and they kept going to their stockpile of plays.

A sixth try followed when Craig Ronaldson, on for Carty at outhalf, pulled a pass back behind a three-man screen for Farrell to feint a pass inside but instead move it on to Aki. He beat Barry Daly’s weak tackle and ought probably have given Adeolokun his hat-trick, but had the footwork and strength to finish. Ronaldson’s conversion made it 40-10.

Replacement scrumhalf Caolin Blade then grabbed a seventh try, with Muldoon slotting over the conversion from under the posts to add to the carnival atmosphere.

When Conor Carey, hard to shift, latched on for the final penalty, Muldoon kicked the ball into the crowd, turned, punched the air and turned to embrace each of his team-mates, while also exchanging handshakes with each Leinster player.

Cue the post-match presentations to Muldoon and the other departing or retiring Connacht players. Few were inclined to leave.

Alas they don’t always get days like this, and they can only say goodbye to him once. Some player though. Some legend of the west. Some send off.

New Killarney athletic track another jewel in the Kingdom’s crown 01:00
Munster beat Glasgow to keep their winning streak going 22:31
Solskjaer says United must be fully focused to avenge Istanbul defeat 22:30
Southampton and Wolves share the spoils at Molineux 22:20
How a visit from his barber helped Kyle Sinckler get back to his best 22:05
Here is your handy guide to sport on television this week