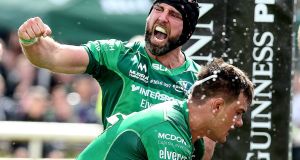 When Ian Botham marked one of his returns from test match exile by taking a wicket with his first ball, Graham Gooch said to him: “Who writes your scripts anyway?” When it came to John Muldoon’s 327th and last game for Connacht, no one could have scripted this.

Even the sun shone gloriously on a record win over Leinster, which even culminated in Muldoon completing the scoring by knocking over the only conversion of his stellar Connacht career and, just as fittingly, the ultimate 80-minute man kicked the final penalty dead to spark the celebrations and on-field tributes.

Some of the Leinster players looked understandably peeved as Muldoon lined up that conversion to wild cheering, notably Jordan Larmour and Cian Healy who rushed up prematurely, and, after a poignant on-field video to celebrate the careers of Muldoon and Andrew Browne, the departing Connacht captain apologised to Leinster.

“I said to the lads before we went out, just do ourselves and do the group proud. And I thought they were magnificent today,” he told the crowd, the vast majority of whom had stayed put. “I thought when we won 20-10 in Murrayfield [in the PRO12 final] that it couldn’t get much better, but I look down there [at the scoreboard] and 47-10 . . . Jesus!”

Indeed, save for the Pro12 final win over the same opponents in the seasonal finale two seasons ago, it’s doubtful there’s been a more memorable one-off win in Muldoon’s 15-year career.

“It was a stunning performance, wasn’t it, for a great man and a great Connacht man,” said Kieran Keane. “They’re absolutely thrilled down in the changing room, both about the performance and the manner in which we achieved it.

“Every dog has his day, and today things were really good for us. Some of the tries were outstanding. They’re a top outfit but today we were too good. He deserved it and he probably had his best game as well. It was a wonderful day for Connacht rugby.”

Jack Carty, who marshalled the show superbly from out-half, said: “We wanted to send Mul and Brownie and all of the rest of the lads off. He got quite emotional before the match in the changing-room. That showed in our first 20 minutes. The way we held onto the ball for multiple phases. That came through from training in the last couple of weeks.”

Citing the work done from those not involved in the match-day 23, and who would even be moving on, Carty added: “It characterised the place, and fellas giving up their blood, sweat and tears for the place.”

As for Muldoon’s legacy, Carty added: “I remember my first match was when I was about 17. It was an A game. I was still in school or just out of school. I was playing with Mul, and we beat Leinster on the day.

“I said it to Mul during the week, I had never said it to him, coming off the pitch he came over and put his arm around me. I had never met him before and he was just like: ‘Keep hammering away with all of your extras, keep the head down.’

“It has been an absolute honour to play with him as a teammate but more importantly to get to know him as a really good mate. That is the way everyone feels about him. What he has done for this club has been phenomenal. We were delighted to send him off in style today.”

Keane said from the outset that, being new to European rugby himself, he needed a character like Muldoon to continue leading the team.

“Mul has been here so long, I needed him to stay captain and just have a look and listen, and see how the place works. So he’d done me a hell of a huge favour personally and he’s a legend as well, because he’s such a good bloke. Under all the accolades that people have thrown at him he’s still Mul, and he’s a good human being.”

Several individuals have been assuming more of a leadership role this past season, while on the seven occasions when Muldoon hasn’t led the side this season, the job has rotated between hooker Tom McCartney, Aussie flanker Jarrad Butler and number eight Eoghan Masterson, as well as the 23-year-old flanker Sean O’Brien, who is seen as captaincy material.

As for a successor as captain, Keane said: “We’ve got a few things to air. I’ve got plenty of candidates. I’ve got some really quality young men who are here and can step into the breach. So it’s who, and I’ve got a few thoughts about it.”

Most importantly, Muldoon’s legacy has to live on with all those who remain part of the Connacht journey. “He’s an engaging man, isn’t he?” noted Keane, who can be as dry as a bone. “And he’s a humble man, and that humility is a strength within the team and the group. They’re hard-working, and when they play for each other look what happens. It doesn’t matter who you are. So I’m right in behind that stuff. It spins my wheels as well.”

As well as Browne and Muldoon, the influential flanker Jake Heenan is also relocating to Bristol after an injury-bedevilled season, and Keane said: “Things will change and personnel will change, but certain things don’t change and that’s what he brings to the club and what he said to the people downstairs. It comes from the heart. Pretty outstanding stuff.”